Parallel to the Galaxy Note5 and Galaxy S6 edge+ Samsung revealed a host of accessories to complement the phablets, ranging from the usual cases to wireless charging pads.

However, the most interesting piece is without a doubt the keyboard case. Available for either model, the snap-on hardware QWERY keyboard is very much reminiscent of the HP iPAQ h6315 from a decade ago.

It covers the bottom quarter of the display, but the UI adjusts accordingly, so you don't need to remove it to access the dialer, for example. You also get hardware Task switcher/Home/Back buttons, since the ones underneath are inaccessible. Oh, and perhaps the coolest part is that the back of the keyboard case looks like a medieval knight mail armor.

Flip covers are also going to be available, as has become typical of Samsung high-end models. They come in colors matching the body of the smartphones and don't interfere with the wireless charging. There were no S-View flip covers to be seen at this point, though. Snap-on backs, which wrap around the corners are another option. Those will come in a wider selection of colors, some with an extra bit of sparkle.

Then there are the wireless charging pads, which look exactly like the ones, introduced back in March with the Galaxy S6. However, the new ones will support fast charging, but you do need to understand the relative nature of the word "fast" when used in conjunction with "wireless charging".

When we said Samsung rushed the launch of the Galaxy Note5, you may have thought it was somehow unfinished. It certainly doesn't appear to be so at this point, instead it's the carefully thought out upgrade we're used to seeing from Samsung.

Sure, it has lost a few of its productivity features, and we'll be hearing a lot about its battery. The comments section was barely beginning to accept that it won't be user-replaceable, as the rumored 4,100mAh capacity was enough to shake battery anxiety away. The actual capacity is nowhere nearly as impressive and the 3,000mAh number is less than even the Note II. 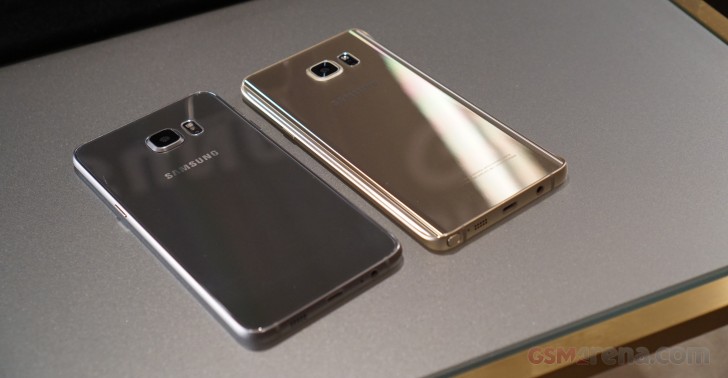 It is three years later, though and we should be able to see strides taken towards battery efficiency and not only capacity increase. And we've witnessed before how capacity doesn't guarantee longevity, so let's give Samsung engineers the benefit of the doubt for the time being. The microSD slot is gone as well, despite the fact that the majority of users were hoping that the Note-series won't go all S6 and abandon storage expansion.

The S-Pen, a practically unrivaled Galaxy Note feature, is here to stay, and it has another trick up its sleeve this time. The click-to-eject action may be just for show, but the precision pointing and drawing are here to do stuff. Plus, you can now customize the Action center, for easier access to most used apps.

The Galaxy S6 edge+ is a different breed of phablet, one geared towards multimedia consumption instead of productivity. It will also fare better among the style conscious among us, who are always that extra bit more likely to go for exclusivity rather than reasonable price and features.

Not that it couldn't perform if need be - it's an equally powerful smartphone with nearly identical hardware save for the dual-edge display. And that dual-edge display has a few neat skills of its own, which we enjoyed using on the S6 edge, and are now enhanced on the Plus.

Add to that the built-in live broadcasting, all the more important in these times of sharing, and Samsung Pay, which does indeed make a genuine promise for ease of use in mobile payments, and there's plenty to justify the new-generation's existence. We'll just need some more convincing on those batteries.