After the United States, the Samsung Galaxy Note5 has started receiving the December security update in India, too. Weighing in at 71.15 MB, the update bumps the firmware version to N920GDDU2AOL1, and also brings along improved voice call stability. 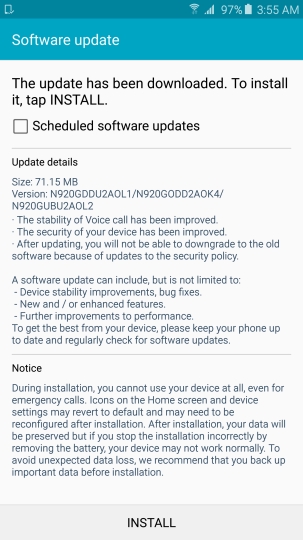 Over in the US, the T-Mobile and Verizon variants of the smartphone have already received the December security update. Other Samsung flagships, including the Galaxy S6 and S6 edge+, started receiving the update just a few days ago.

For those who haven't received the update yet, you can also manually check for it by heading to your device's settings. To know what all is included in the South Korean company's December security update, head to the Samsung Security link below.

Too bad they didn't fix the lock screen security issue(fingerprint unlocking method).You can actually get pass through the lockscreen.

its actually fun that we get some months update, after the month have passed :P get december update in january, logic 1 0 1 :P europe will prob first get the update in feb. so the idea of monthly security updates instead of version number updates, is...