Samsung’s recall of the Galaxy Note7 is nearing completion, having passed the 90% mark at the end of September. And yet Apteligent has discovered something strange (this is the analytics outfit that pointed out that Note7 usage continued to rise during the recall).

Samsung Galaxy Note7, the phone that no longer exists, is still used by more people than the LG V20, the HTC Bolt or the OnePlus 3T. It only just slipped below the Moto Z and both Google Pixels. 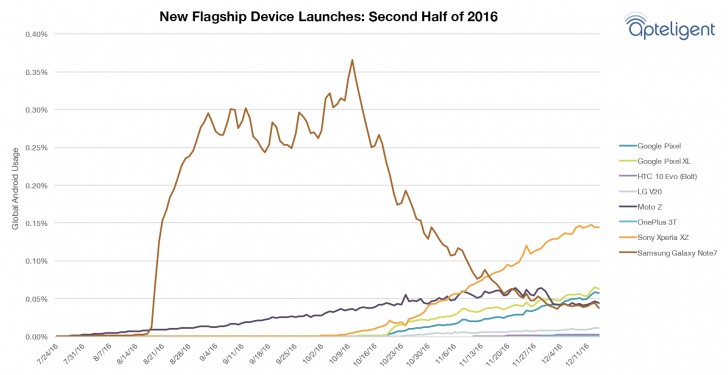 Of course, LG chose a rather limited launch for the V20 and the HTC Bolt is a Sprint US exclusive, while Apteligent’s data accounts for global numbers. OnePlus already launched the 3T globally, however, most recently in India. Then again, the Note7 numbers represent less than 10% of all units sold (as per Samsung’s recall progress), it gives you a sense of scale. Good news for Sony, though, the Xperia XZ is doing better than all the phones on this list.

Statistics also say that iPhones are quality, but we all know otherwise.

Dunno what region you're from but the S4 in my country had the Exynos 5410 and it was hella good at the time. The S5 was good but boring and a bit ugly.