While we wait for Samsung to announce the Galaxy Note8 (which may happen on August 23, according to the latest rumor on the matter), more and more stuff regarding the phone is leaking. Today we get three renders that are said to depict the upcoming phablet, though we're only treated to a view of its front.

While the bezels are black in all three renders, there are three different UI themes showcased. So these three Note8 units might actually have different hues - but, just as it did with the Galaxy S8 and S8+, it looks like Samsung is going to make the front black regardless of color version. 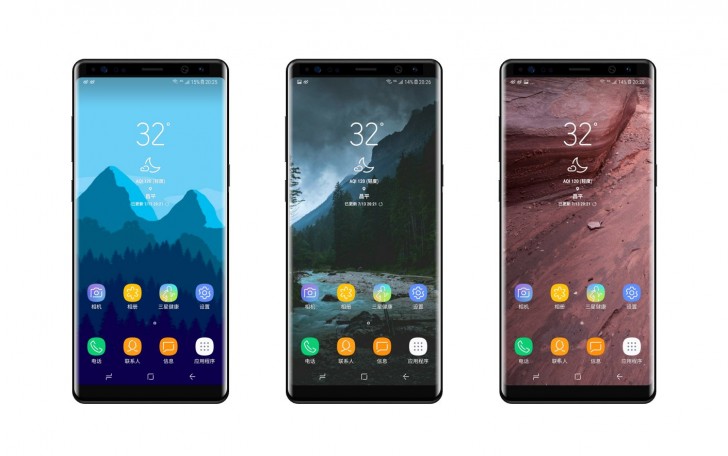 One rather famous Chinese leakster claims these images do in fact portray the Galaxy Note8 in all its glory, so make of that what you wish. We obviously can't guarantee that these renders are the real deal.

Compared to the S8+, the screen curves seem to be less pronounced, while the panel will surely be branded an Infinity Display this time around too. It's been rumored to be 6.3" in size, diagonally, which would make it marginally bigger than the one in the S8+.

The Galaxy Note8 should be powered by the same chipset combo as that device, namely the Snapdragon 835 in some markets and Samsung's Exynos 8895 in others. 6GB of RAM will be on board, along with dual 12 MP rear cameras and a 3,300 mAh battery.

It's not the size amount which is the problem, it's the ram manangement, which is crap on samsung and will always be.

can't u see that the icons are exactly the same?