With its official introduction fast approaching, we've always known it was just a matter of time before we saw the Samsung Galaxy Note8 in a benchmark. And today that's exactly what happened.

A prototype Note8 has been put through the paces of Geekbench, and this has resulted in the confirmation of a couple of the phone's oft-leaked specs. The device we're talking about here is the one with the model number SM-N950F, which will be destined for Europe and other global markets in a single-SIM iteration. 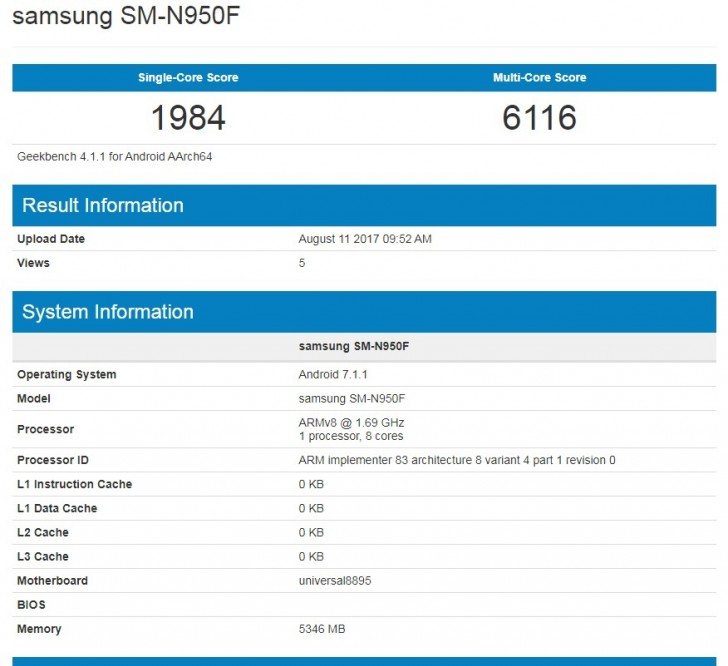 It boasts 6GB of RAM according to the benchmark, so it's pretty much a given that it will be the first Samsung high-end smartphone to reach that amount. It's powered by the Exynos 8895 chipset, the same one inside the similar SM-G950F version of the Galaxy S8. That's no surprise either, when we go by past leaks and rumors.

The Note8 prototype runs Android 7.1.1 Nougat, and we expect the finalized handset to launch running that version of the OS. According to previous mumblings, the Note8 should sport a 6.3-inch 18.5:9 Super AMOLED Infinity Display, the S Pen stylus of course, and a 3,300 mAh battery. A dual 12 MP camera system will be on the back, enabling fixed optical zoom.

umm, I have no idea what you said. Your mish-mash of...whatever you said made no sense. All I said was that this was not the phone I'm waiting for. Most likely the LG g7 will be my next phone. Very impressed with my g5 :). No bootloop, great...

I'm a note 4 user and and with only 3200 mAh running Marshmallow it is bad. And you have to buy genuine replacement batteries too. This is because all of Samsungs batteries for NFC devices have the aerial built into them. But to only have 100 mAh mor...

Are you talking about iPhone 8/10th anniversary edition?? This is the phone that all the world is waiting... note 8??? Lol specially before note 7 fiasco!