As we get ever closer to its August 9 official introduction, Samsung's upcoming Galaxy Note9 just keeps on leaking. Today we have a shot of what is claimed to be a promotional poster being readied for the handset's launch.

It shows us the oft-leaked new positioning of the fingerprint sensor on the back, which sits below the horizontal elongated island that houses the dual cameras, flash, and heart rate monitor. It's also confirming that the Note9 is keeping the headphone jack. For those afflicted by OCD, the closeup of the device's bottom may be heartbreaking, what with the misaligned holes and all that. 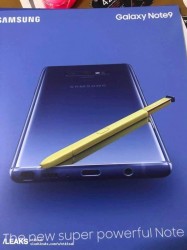 Most intriguing, however, is that a blue Note9 seems to be paired with a yellow S Pen. Only the top of the stylus is blue, so when it's tucked inside the phone it won't look out of place.

While we've heard that Samsung is prepping bolder colors for this year's Note, we weren't expecting such a move. Obviously this is nothing but an unconfirmed leak, but what if this pans out? Let us know what you think in the comments.

Moore legislated a promise that improvements wouldn't come at a cost. So it shouldn't cost more (he said, remembering the yesteryears of sub 500 euro flagships).

Exactly the point, don't expect gaming. So watching 360 videos and photos only. Yea, 4K and higher resolution will work great for it. But is it worth the cost now?