Just outside of the main MWC venue area, we glimpsed a billboard of an upcoming Note tablet from Samsung. Not to be confused with the Galaxy Tab 2 10.1, the Galaxy Note will possibly be targeted towards a different audiences. From the ad, we can tell it also features the S Pen stylus, which the Tab 2 does not. 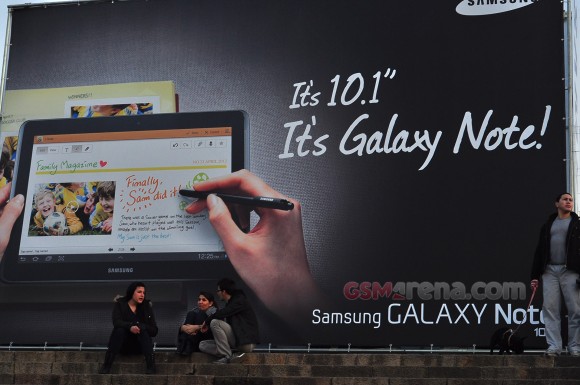 Historically, it's not uncommon for the Samsung unannounced devices to be leaked across the MWC grounds.

As you'll recall, the original Galaxy Note is a 5.3 inch device, which could be either regarded as a large smartphone or as a small tablet. At 10.1", the argument over whether its a phone or a tablet becomes effectively void this time around. What Samsung's new slogan will be for the new Note 10.1 tablet, we'll find out tomorrow.

i should tell...it is a fact that samsung tabs better in hardware than IPAD2 but whta the advantage?????when apps!!!! yeah duuude