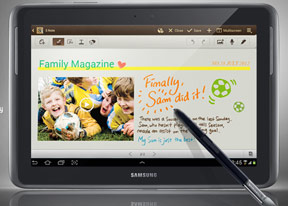 The S Pen sports the same wealth of features as before. You can use it for writing or drawing, but it can also be used to navigate the UI. With the button on its side, you can do gestures - a swipe to the left is back, a swipe down opens up the context menu and a double tap opens the S Memo mini app. A press and hold captures a screenshot.

The S Memo app lets you scribble notes with the S Pen (or your finger). There are various pen styles and colors, as well as undo/redo buttons and an eraser if you don't fancy the look of your work. You can insert images from the gallery, other memos and even part of a map.

The app also has some pretty advanced functionality. It can recognize shapes, for example, so our squiggly squares and circles looked perfect. It can do standard text recognition too and, more impressively, recognize and calculate mathematical formulas! Furthermore, it'll give you a solution to a particular mathematical problem as well.

S Memo is an easy way to jot down notes

The S Note offers several templates that you can use to design professional looking cards that you can later export as an image file or PDF. They can have multiple pages too - PDFs are more convenient here as they keep all pages in one document. S Note is a great way to prepare presentations on the Galaxy Note 10.1.

While in edit mode, you can use two fingers to pan around a document (using just one would draw a line instead).

The S Planner is a custom calendar that has a lot of different views - Year, Month, Week, Day, Agenda and Task. It can sync up with several calendars (including the one from Facebook) and you can choose which ones are visible.

The app is beautifully designed and quite handy - with the month view in portrait, you can select a day and all events for that date will be listed at the bottom of the screen.

S Planner is a comprehensive calendar

Adobe launched Photoshop Touch as part of its Touch Apps suite and it is preloaded on the Galaxy Note 10.1. It's fairly simple to use with an intuitive interface, but there's a set of 13 tutorials just in case to teach you how to use the app. They come with all the required photos preloaded too.

Photoshop Touch features most of the core things you're used to in the desktop apps - layers with opacity and blend modes (no layer styles though), various image adjustments and effects, selection tools, clone stamp tool and so on.

One cool thing about the S Pen is that you can hover - keep the stylus a few millimeters away from the screen and the app will display a cursor tracking the S Pen. This will really help you aim better.

Another thing that improves accuracy is that you can rest your hand on the screen and it won't register as a touch. Having to keep your hands above the screen gets pretty tiring, so this is a great feature. It also gives you better accuracy with the S Pen.

Using a stylus is already a more natural way to draw than with your fingers, but the S Pen has one extra feature - it allows you to use different amounts of pressure, which dynamically control the brush width. It's very sensitive and there are a lot of pressure levels available.

The other app from the Adobe Touch Apps suite is Ideas. It is a much more basic sketching and note-taking tool and has two layers - one to draw on and another one as a background image. The only tools you get are a brush (with customizable size, color and opacity) and an eraser.

Ideas is meant to let you quickly sketch things to later upload to Adobe's Creative Cloud. There are other applications available for purchase such as Debut for presentations, Proto for designing website prototypes and more.

Both apps, even though intensive, run smoothly on the 1.4GHz quad-core Exynos 4412 chipset and its 2GB of RAM.