The Samsung Galaxy Note 4 captures images at 16MP and its sensor has a native 16:9 aspect ratio so it produces widescreen images that can be viewed in full in the gallery and on the majority of monitors.

The main camera has an aperture of f/2.2 (the same as its predecessor) but finally offers optical image stabilization, which should improve things when shooting in low light. The front-facing camera has also been improved - it now has a wider aperture of f/1.9 (so it should be a little better in low light) and has seen a resolution bump to match the screen - 3.7MP (or the screen's 1440 x 2560 pixel resolution).

Unlike Galaxy S5's Samsung-made image sensor, the one in the Galaxy Note 4 is provided by Sony and lacks the phase-detection autofocus hardware.

The camera interface carries the same design as the one found on the Samsung Galaxy S5. There's a column of shortcuts on the left, the middle two of which are customizable. All settings are collected into a grid of shortcuts so you can access everything easier. The camcorder shutter and settings are all located in the main camera app.

The Mode button is a scrollable list at the bottom. The shooting modes preinstalled on the Samsung Galaxy Note 4 weren't many. You have selfie mode, selective focus (where the camera allows you to apply software background blur) and Panorama.

The Samsung Galaxy Note 4 takes excellent pictures. The higher megapixel count is noticeable and we welcome the wider aspect of the images as both allow a bigger, better photo. Detail is superb, especially in the center of the photo but still doesn't degrade too much towards the far edges.

Images came out tack sharp across the frame and focusing was spot on. We noticed that the Galaxy Note 4 was very fast to lock on and even surpassed the Samsung Galaxy S5 on every occasion.

Colors aren't as punchy as those of the Galaxy S5 but are still vibrant. The white balance was spot on, finding a great middle ground between cold and warm. Scenes are well exposed and we like the dynamic range from the 16MP camera - the shadow and highlight areas of the image are well exposed.

There is some noise visible in the shadows and in solid colors (such as in the sky) but it's kept reasonably under control.

The autofocus when capturing close up (macro) images fares extremely well. The Samsung Galaxy Note 4 can get very close to its subject (around 6cm) and capture detailed images. There is also a reasonable separation from the object and the background leading to a nice blurred effect (bokeh).

HDR samples aim to expose the entire frame better by capturing a series of shots at different exposures and matching them for the final result. We like the HDR effect on the Galaxy Note 4 - it gets a lot of detail back into the shadows but also improves upon the highlights. See the examples below.

Panoramas come out at an incredibly high resolution. The maximum resolution in portrait shooting is a whopping 56.6MP (Apple just upgraded the maximum Panorama resolution for the latest iPhones to 43MP), while in landscape you get a decent 28MP. Detail is great, especially in the higher-resolution of the two and there are no visible stitching artifacts anywhere.

Overall, we can say that the Samsung Galaxy Note 4 carries one of the most capable cameras you can find on a smartphone. The quality is very high, detail is aplenty and things are always in focus and always sharp. The large resolution is welcome and the 16:9 makes much more sense than 4:3 (or any other ratio for that matter) on a 16:9 device.

We were interested to see how the Samsung Galaxy Note 3 fares against the newer Galaxy Note 4 so we shot a few images with both and have prepared some crops at 100% resolution to show you the difference. Now we won' be getting too specific just yet - we'll reserve that for the extended comparison between the two phablets.

The Samsung Galaxy Note 3 has a 13MP snapper on the back so its photos will be smaller. The added resolution should help the Galaxy Note 4 get some more detail into the frame. However the difference shouldn't be drastic because of the difference in ratios - the newer Galaxy Note 4 captures a wider image of the scene. In scenes with more fine detail the 16MP snapper of the Galaxy Note 4 is clearly superior. The textures on the wall of the building below indicate just that. Not only that, but it clearly has a better dynamic range, as the highlights on the left are not blown as on the right, while keeping nearly the same exposure of the shadows. 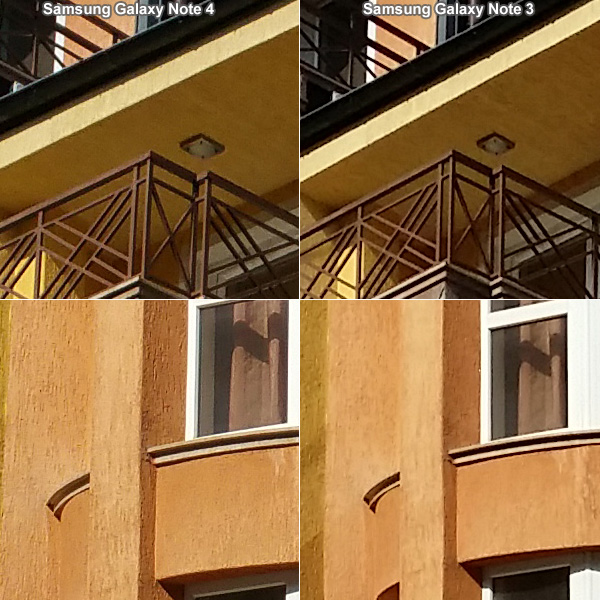 Here go the full resolution samples of both smartphones if you want to do some additional comparing.

The images below are shot at ISO 500 (automatic ISO) and with a shutter speed of 1/10s. As you can see the Samsung Galaxy S5 has a blurrier image while the Galaxy Note 4 keeps things a little more sharp at the same shutter speed. All four images were captured handheld. 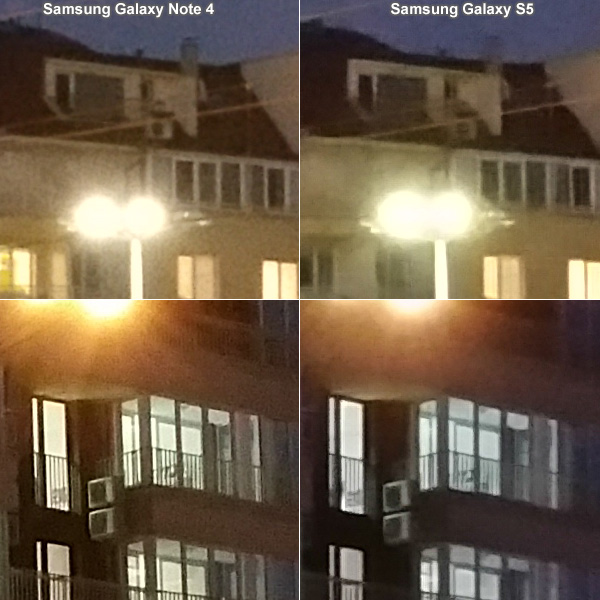 Finally, we tested the new front-facing camera on the Samsung Galaxy Note 4. Its resolution has been increased up to 3.7MP (to match the resolution of the display) and it has a wider aperture of f/1.9 that should give it an advantage in lower light.

The Galaxy Note 4's front-facing camera is a little wider but the amount of captured detail is approximately the same.

The photo quality comparison tool allows you to compare the Samsung Galaxy Note 4 against any of the phones we've tested. The ISO chart shows the resolution the Galaxy Note 4 camera can achieve (vertical and horizontal), the grey chart tests color reproduction and noise and finally the color chart gives you even more color reproduction tests along with fine detail assessment.

The maximum available resolution videos (UHD or 2160p) carry the highest bitrate among the pack - almost 50Mbps. The framerate was a constant 30fps and smooth enough. Audio is captured at a very high 253Kbps with stereo sound that's very clean.

The detail level of the UHD videos is impressive - it's like viewing a live, animated 8MP image (8.3MP to be exact). UHD videos carry the same good characteristics of the still shooting mode - great, vivid colors, great dynamic range and everything in sharp focus. Here goes a sample.

The regular 1080p videos at 30fps carry an okay bitrate of 18Mbps with the same great audio capture. The framerate was around 29fps but still stutter-free. There is plenty of detail in the regular FullHD video but compared to the UHD video the 4x lower resolution is evident.

Another nice feature is that you can apply lossless zoom in FullHD videos - up to 2x zoom without loss of detail.

And finally 1080p videos at 60fps. Those are mainly meant to show smoother motion but don't have as much detail as 30fps 1080p videos. The difference isn't dramatic - there's still plenty of detail to go around. The doubled framerate allows for extremely smooth movement in the video. 1080p@60fps videos have around 28Mbps of bitrate.

If you want to further pixel peep on the Samsung Galaxy Note 4's behalf you can venture into our video comparison tool.

Both the Samsung Galaxy Note 4 and its predecessor shoot UHD video at 30fps. The bitrate is around the same so the detail is also pretty similar. The Galaxy Note 4's field of view is a little wider here and that's why object appear a little smaller and hence less detailed than the ones shot by the Note 3. Color rendition is slightly different too, with the green and blue appearing more saturated than the Note 3, while the red and yellow are a little less saturated. 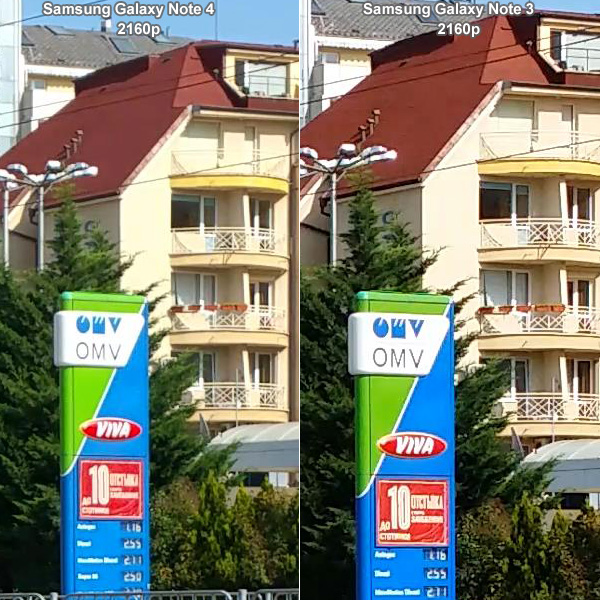 Since the Samsung Galaxy Note 4 uses optical image stabilization during video recording, clips turn out a little steadier than before. Below you'll find a sample that shows the OIS in action, smoothing and steadying every movement.