Tradition dictates that rumors and leaked renders of an upcoming smartphone should be followed by actual live photos, and here we go as Samsung's Galaxy Note 5 and S6 edge+ posed in front of a camera. Confirming what was already more or less established, the images depict the edged phablet in golden attire, while the Note 5 is in a more orthodox white.

The Galaxy S6 edge+ isn't trying to hide its relation to its smaller edge brother released in March. In fact, if it wasn't for a minor difference in the curve of the corners and the straight top and bottom edges, we may as well be looking at the phone and not the phablet. The gold color will be appreciated by the flashier customers, though the contrasting home button may bother some. 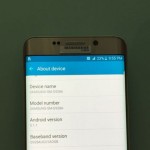 The other more meaningful piece of intel, revealed by the photos, is the OS version on the Galaxy S6 edge+, and it's going to be Android 5.1.1 Lollipop - only the latest is befitting of the upmarket smartphone.

The Galaxy Note 5 photos are almost equally as predictable, but they do clarify a few things. The sensor arrangement on the left of the earpiece corresponds to the renders we exclusively delivered, and not to the triple cutout previously leaked. Additionally, the thin bezels that we expected, based on display and overall dimensions, indeed appear to be a reality.

That's all there is for now, but expect to see higher-res better-lit spy images of Samsung's upcoming phablets, as the alleged August 13 launch date approaches.

no... the one who wrote the article and took the pictures uses an iPhone - these websites use many contributing writers to submit their articles. gotta love the haters

No I'm talking about Apple only ever does minor changes to S models so the 6S will be almost identical with a few new bits stuck on to save money on production costs.