Samsung Galaxy Note 8.0 goes official with S Pen on board

After making an appearance earlier today, the Samsung Galaxy Note 8.0 got officially announced. The compact Android Jelly Bean slate will be available worldwide in Q2 this year in Wi-Fi only, 3G and 4G LTE versions. Telephony support will also be available. Pricing is yet to be revealed. 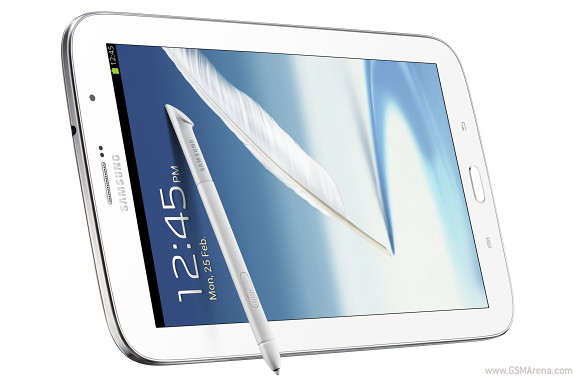 When available, the Samsung Galaxy Note 8.0 will sit between the Galaxy Note 10.1 and the Galaxy Note II in the company's Android range. The slate's design follows the same language as the rest of the current Note range.

The Samsung Galaxy Note 8.0 features an Exynos chipset with a 1.6GHz A9 quad-core CPU and 2GB of RAM. There are 16 or 32GB of available built-in memory on board and a microSD card slot for further expansion. The display is an 8" unit with WXGA resolution (1280 x 800 pixels) and a pixel density of 189ppi. There's a 5MP main camera on the device's back and a 1.3MP front-facing unit. Naturally, the Samsung Galaxy Note 8.0 comes with an S Pen which packs Wacom tech.

The Samsung Galaxy Note 8.0 boots Android 4.1.2 Jelly Bean which features the company's latest TouchWiz UI. There is a host of software tricks up the tablet's sleeve which include Smart Stay, Direct Call, a host of S Pen-centric apps, and the usual set of Samsung Hubs. A Smart Remote is also on board. It utilizes the slate's IR port, located on its right side.

We will be bringing you live impressions of the Samsung Galaxy Note 8.0 when we hit the MWC floor, so stay tuned for our impressions from the device.

I was anxiously looking forward to this device. I'm an owner of the original Note, which was refreshingly large enough to read e-mails, books and pics but still too small for practical surfing, pdf's and taking full advantage of the amazing sPen. The...

NOT true! How can they be uglier if they have the same design in the last year? :-)

Ja, you believe that Samsung with Android OS are the best? , As it shows that they have never had a Nokia 1100, those phones are indestructible. xD lol.