Samsung has just announced the availability of the Galaxy Note Edge for the United States. The smartphone will become available as early as this week and major operators will be carrying it.

Samsung Galaxy Note Edge was announced back at IFA expo in September, but later Samsung specified it will be a limited availability device. NTT DoCoMo and KDDI in Japan were the first to offer the Note Edge, but now its reach is expanding beyond Asia. 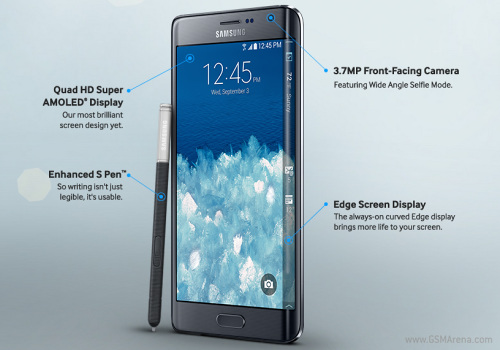 All major carriers - AT&T, Sprint, T-Mobile, Verizon Wireless and U.S. Cellular - will be getting the Samsung Galaxy Note Edge by the end of this week. It will be available with a two-year agreement or SIM-free. Aside from the carriers, you will be able to get the unique phablet from the Samsung Experience Shop in Best Buy and some other unspecified retailers.

AT&T was the first to detail the Galaxy Note Edge availability - it will go on sale urchase on November 7. As expected the Samsung Galaxy Note Edge is quite a pricy device - it costs $399.99 with a two-year contract or $945.99 if you go contract-free. Naturally AT&T Next lease options are available as well.

We guess the other carriers will offer similar pricing to AT&T's and the release date should be around the same time.

Just a quick reminder - the SIM-enables Samsung Gear S smartwatch is also set to launch on November 7 in the USA, so you might want to pair your new Note with the powerful Gear S.

I want to try this before I knock it.

The final boss from samsung