The rumors for an upcoming 12.2-inch Samsung Galaxy Note have been around for quite some time, but it is just now we get to see the real deal. Apparently the slate will be going official at CES in a few hours since its massive banner is already on the streets of Las Vegas for everyone to see. 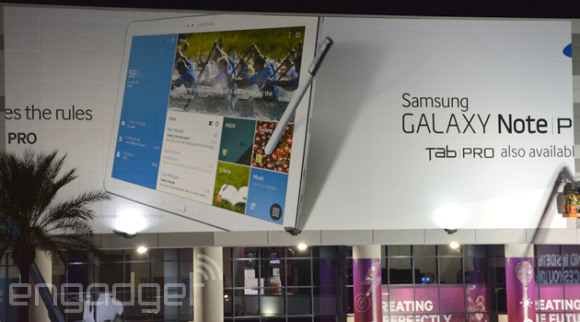 Thanks to @evleaks, we get to see a glimpse into the specs of the four slates plus an official render of the Galaxy Tab Pro 8.4 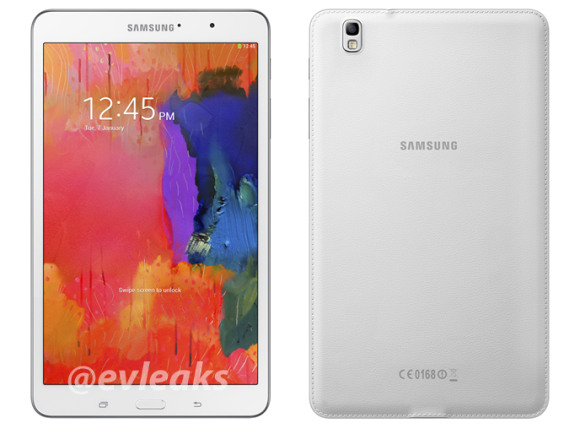 According to the notorious tipster all four slates will feature WQXGA (2560x1600px) displays, 8MP rear and 2MP front snappers, and will run either on Snapdragon 800 chipset (for the LTE models) or Exynos 5 Octa (for the Wi-Fi/3G flavors). Android 4.4 KitKat with the latest TouchWiz UI will be in charge of operations on all Galaxy Pro devices.

The Samsung Galaxy Note Pro 12.2 and Galaxy Tab Pro 12.2 will offer 3GB of RAM, 32/64GB internal storage and massive 9,500mAh batteries. The Note slate, naturally, will come with an integrated S-Pen and all compatible S-Pen apps and services.

As you can see the two share almost identical bodies, save for the S Pen slot, which is absent on the Samsung Galaxy Tab Pro 12.2

All four Galaxy tablets will be announced at Samsung's CES press conference in a few hours.

completely agree on renaming 2014 ed to notepro. current name is too long. hope they port all the kitkat goodies to barely a quarter old 2014 tablet.

True, your country does not have 4.2.2 update for Note 8.0. But still you can go to sammobile.com and download another country's firmware with 4.2.2

go buy an ipad den. =.= 1) bezels are for a reason (tablets only) 2) you probably havent read the specs of Tab Pro 10.1 and just made a dumb comment so we can read it 3) den you would complain how this is copying ipad, and they should stop dis ...