The Samsung Galaxy Note has finally landed on US shores and is now available for pre-order through AT&T and Best Buy stores for $299 and a two-year contract. Orders are said to start delivering starting Saturday, February 19. 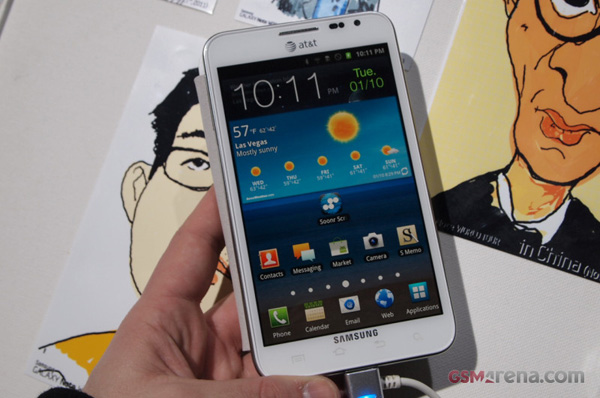 The phone will be available in two colors, Carbon Blue and Ceramic White, and will have a bunch of optional accessories to go with it, such as a desktop docking station, spare battery charger and flip cover case and pen holder.

It will be running Android 2.3 at launch but hopefully Samsung and AT&T will upgrade it to Ice Cream Sandwich along with the international version.

You can watch the Super Bowl ad for the phone here.

1.4GHz A9 is a better than 1.5GHz Snapdragon. Its unlocked here and hence costlier. The phone in the US is under a 2 year contract.

I'm kinda torn. If I do pick up this phone, it will not be under contract. If the AT&T version with LTE breaks my grandfathered unlimited data plan, I will definitely get the international version.

international note have arm A9 cores but this one based on arm cortex A8. Also it's 300 with two years contract