Spreading the Galaxy S III magic to as many market segments as possible is what Samsung is actively trying to achieve these days. After the power users were treated to the Note II and those looking for a premium experience in a compact shell got the mini, it's now time for the mid-range market to get some attention. 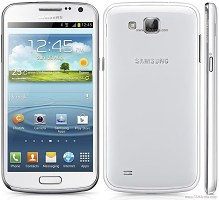 The Samsung Galaxy Premier specs sheet is familiar with the 4.65-inch Super AMOLED touchscreen and the dual-core TI OMAP chipset immediately bringing the Galaxy Nexus to mind. However, calling the Premier a Nexus refresh is wildly inaccurate - the Nature UX adds so much character that you'll hardly be able to tell there's so much in common between the two smartphones.

Let's take a look at what the Galaxy Premier is all about.

Sure, the Samsung Galaxy Premier doesn't have the most exciting specs sheet around, but it takes a formula that was already proven to work and improves on it in a number of key areas. Building on the most popular Nexus smartphone so far, the Premier addresses just about every complaints users had about it.

The mediocre camera is replaced by a more capable 8MP shooter, the chipset got a speed update and a more powerful GPU, while the uninspiring styling got spiced up with a dash of Galaxy S III. There is also an ampler battery to take care of the relatively short endurance and a microSD card slot for cheap memory expansion.

Samsung Galaxy Premier at ours

And yes, the stock Android looks are gone, but they are replaced by the Nature UX, which is not only way more functional, but also the best looking TouchWiz version so far.

Let's see if all those tweaks actually look as promised - the hardware inspection starts right after the break.

Is MHL support granted? Only in this review I found this phone supports MHL. Should a cheap Galaxy Nexus i9250 USB cable work?