The Samsung Galaxy Premier weighs 130g, which is 5g lighter than the Galaxy Nexus. Impressive, considering that there's a larger battery and a microSD card slot here.

The Galaxy Premier might be made entirely of plastic, but it's very well put together and it generally looks pretty good even for its price range. Of course the huge screen with the thin bezel at the front contributes a great deal to the high end vibe,

Above the screen there's a 1.9MP camera, a proximity sensor and an ambient light sensor. Next to them is the earpiece.

The usual array of sensors surround the earpiece

Below the screen is the familiar three-button combo - a hardware home button in the middle with two capacitive keys on either side for Menu and Back.

The usual three keys under the screen

The right side of the phone features only the power button.

The power key is located on the right side

On the left side you'll find only the volume rocker.

The volume rocker is on the opposite side

The 3.5 mm headphone jack is placed at the top of the device, alongside the secondary microphone.

There's a microphone next to the 3.5mm audio jack

The primary 8 MP camera of the Samsung Galaxy Premier comes equipped with a single LED flash. There's also a loudspeaker grille at the back. The battery cover has a delicate rubbery feel to it for an excellent feel in hand.

Popping the back cover open reveals the 2100 mAh battery. Above it reside the microSIM and microSD card slots. We are currently running our usual battery tests on the Samsung Galaxy Premier and you should check back with us tomorrow for the results.

The card slots are placed under the battery cover

We've conducted our battery test on the Samsung Galaxy Premier and the results are quite good, especially where video playback is concerned. If you do an hour of talking, web browsing and watching video you'd need to hook up the phone to a power source every 51 hours. For the full breakdown, go here. 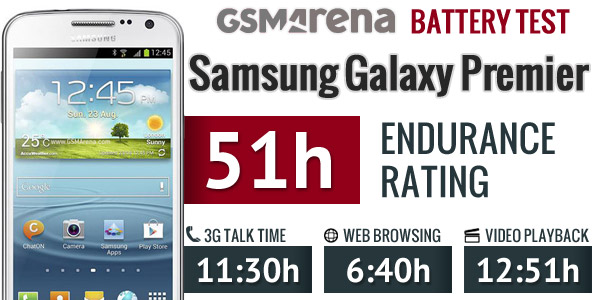