The Samsung Galaxy S11+ (SM-G986) has surfaced on Geekbench and as expected, it’s powered by the Exynos 9830 chipset. Naturally, there will be a Snapdragon 965 version for some regions.

The benchmark reveals that the phone packs 12GB of RAM, which matches the maximum configuration of the S10+. Whether or not there will be an 8GB version this time around remains to be seen.

Unsurprisingly, the Galaxy S11+ ran Android 10 for the benchmark. Samsung has been busy updating current models to v10, which also comes with One UI 2.0. 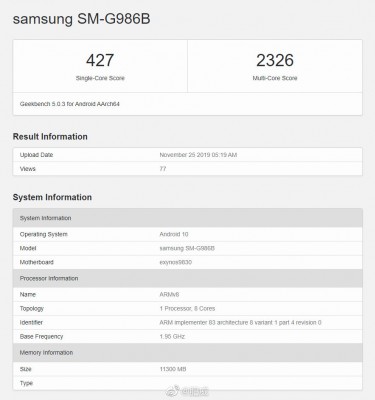 There’s not much to say about the benchmark results, however. The single-core result is lower than the Exynos 9825, suggesting that the hardware, the software (or more likely) both are unfinished.

What’s inside the 9830 chipset? The full details are unknown, but it seems that Samsung is dropping the custom cores for the next high-end chip. Based on this report, it seems to have two clusters of four cores each (unlike previous chipsets, which had a 2+2+4 configuration). We knew Samsung shut down its custom core division, we just didn’t expect it to have an effect until the S12 generation. 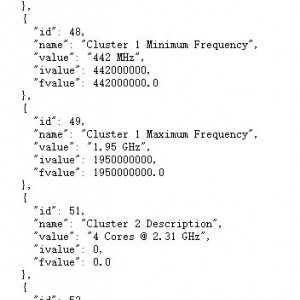 The Exynos 9830 may feature only standard ARM CPU cores

Anyway, the new chipset will need to show a higher performance to keep up with the 120Hz screen (a 6.9” Dynamic AMOLED panel with QHD resolution). Additional rumored specs include 108MP main camera and 48MP telephoto with 10x lossless and 100x hybrid zoom. The plus model is expected to have 5G connectivity while the smaller models will come in 4G and 5G flavors.

If this real performance of upcoming Exyons 9830 or 990 whatever no thanks Samsung I will stick with S10 plus Exyons 9820 even the single-core performance worst than S9 plus in geek bench 5!.

Farewell sammy, we won't be seeing each other until snapdragon comes to europe.

Can't handle a 4k? You mean a 4K screen on a Phone is a complete waste of time and resources.