Samsung’s Exynos division may be losing its biggest customer – Samsung’s phone division. Korean publication The Elec reports that the upcoming Galaxy S11 flagship will use the Snapdragon 865 chipset over the Exynos 990 in all regions but one.

Traditionally, the US, China and Japan got Snapdragon chips, due to better support of local 4G flavors by the Qualcomm modem. However, next year all regions except Europe will switch over to the Snapdragon. Yes, even Samsung’s home country of South Korea – while the market isn’t that large (~20 million shipments a year total), it’s a point of pride for Samsung. Or rather it was.

Why the change? According to The Elec Samsung leadership decided that the performance difference between the two chipsets is too large. Don’t expect Samsung to say it officially, though. Still, the company already shut down its custom core division, so clearly it wasn’t happy with where things were going. Just keep in mind that this hasn't been officially confirmed by Samsung. 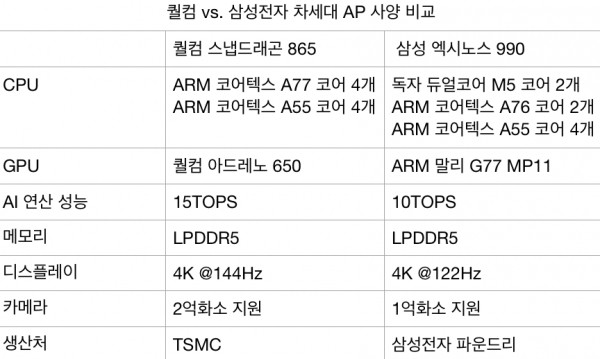 The Snapdragon 865 chipset uses the latest Cortex-A77 cores, has 15 TOPS of AI performance and the ISP can handle 200MP cameras. The Exynos 990 for comparison uses the older A76 cores, its NPU can do 10 TOPS and the IPS goes up to 108MP cameras.

Those megapixel counts may have sounded like ridiculously high numbers at the start of 2019, but the Galaxy S11 will come out with a 108MP camera, which maxes out the Exynos (and you have to take into account frame-stacking features like HDR+). And the NPUs are getting roped into more work every day.

Samsung recently announced that it will use MediaTek 5G chipsets in some of its lower end models, which was another blow against the in-house Exynos division.

And what did you think you proved? Plus only the low tier rog is glass on the back. But that didn't prove about it being weak or that supposedly iPhone is built with extra durability.... Is still a fragile slab. And it sure as heck seemed like...