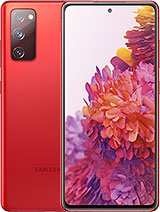 Hamid33, 21 Dec 2020Please someone tell me if this is a good phone and doesn't have screen issues (rumors aro... moreEverything is ok, but it stops charging

There is big problem of fast and super fast charging in this phone. While charging with super fast charger, it automatically stops charging. Even Any 10k phone will not face this pro. Disaster phone. Samsung has cheated the customers on the name of s20 series.

i made good choice! it works nice. i bought it 2 month ago. good job samsung

Please someone tell me if this is a good phone and doesn't have screen issues (rumors around says only 5g versions have this issue ) . Tell me about camera, screen, performance, speakers and whatever you think i should know before buying it. Please help me with this.

Kiza, 19 Dec 2020FE has Dex, you miss it in your specs.Lol the reason they don't put it there is that Dex for 2 minutes boom Exynos overheats 🚮

Worst ever phone i have used yet. Got cheated into buying this with the name of S20 series. The main issue is it getting heated like hot stove just for normal browsing. I won't buy Samsung products anymore. Goodbye Samsung...

FAM, 09 Dec 2020the screen is problematic that is I have to touch more than twice to get response. such proble... moreThis phone can not work normally with screen protector on it, I had serious problems few days so today I removed my glass protector and it is working fine so far, been less than 24hours tho so I can not guarantee you it will help you

FE has Dex, you miss it in your specs.

RealUser, 18 Dec 2020I have both the Samsung Galaxy S20 FE exynos version and the Xiaomi Mi 10T. The Mi 10T's ... moreMIUI is always bloated. What do you expect on a cheapskate Xiaomi phone?

Anonymous, 18 Dec 2020Are you serious? Mi 10T has even worse specsI have both the Samsung Galaxy S20 FE exynos version and the Xiaomi Mi 10T. The Mi 10T's battery lasts way longer even on 144hz refresh rate (it has AdaptiveSync display). It also doesn't heat up like the S20 FE. I would say the exynos processor and the battery life is the S20 FE's biggest letdown but other hardware specs like the cameras, speakers and audio output via earphones and Bluetooth are better than the Mi 10T. If only the S20 FE had better battery life, it would have been a great all-round smartphone. The S20 FE is also light and comfortable to hold over long periods compared to the Mi 10T.

I got 5h 40 mins SOT after second charge. I came from an a51. i feel on a51 the battery last longer. Mine is exynos variant (s20 fe 4g). Anyway i feel i want more battery power. Is fixable with software update i think.

Fatih, 13 Dec 2020I know which smartphones you have used before, but you may have used those that did not have a... moreLol he/she just tell his/her opinions and experiences after using his/her phone. What are you so oppressed and triggered for? He/she thinks his/her phone is great so it's his/her right to praise and give credit where it due. Who are you to deny that? Because you got the problematic one so you don't want anybody else feels happy, is it? Why she must be sad for other's problem? You phone got an issue so that's your problem, not his/her.

leila, 12 Dec 2020I have been using this phone for a week now and I am in love. I really don't understand t... moreI know which smartphones you have used before, but you may have used those that did not have a better camera than the s20. color reality is extremely irrelevant. Okay, the shots are not bad, but it would be wrong to describe them as magnificent. Besides, the device already has high-end hardware, why were you afraid of its performance? It looks like you bought the device without knowing it! The fact that you haven't had a problem cannot cause you to ignore the problems experienced by the other person. there are problems that those people go through and are we going to ignore them?

I have been using this phone for a week now and I am in love. I really don't understand these comments to be honest. I understand the ghost touch problem but thankfully I do not have it, tested multiple times. My battery goes on a whole day, I charge my phone about every 18-20 hours, and I use my phone a lot! I dont play games though, only social media, texting, and some videos. Mine is Exynos, I was afraid that I'd get a bad performance because of that but no it is great for me. The camera is amazing, front camera is a bit washed out, but you have an option to make it warmed in default camera settings. Main camera is woah.

Kryptonyx, 04 Dec 2020Battery lasts half a day, charging it 2-3 times per day. This is super annoying. Overnight dr... moreDo you ever check your apps working in background? I always charge my phone before sleep, and in 8-9 hours of night time, it only goes down about 4-5 percentage at most.

Anonymous, 11 Dec 2020But within 7 days of purchase if any problem happens regarding hardware it should be replacedIt is 14 days, but they will make you slog like anything. You will be frustrated and leave it.