Samsung is announcing the Galaxy S20, S20+, and S20 Ultra at an event on February 11 (alongside the Galaxy Z Flip), and lately we've seen a lot of leaks about the company's upcoming flagship family. Nothing beats a full spec sheet, though, and today this is exactly what got leaked.

So here's what you can expect. Note that these are all 5G versions, and specifically the ones headed to Europe and other places where Samsung doesn't generally use Qualcomm's Snapdragon chipsets. 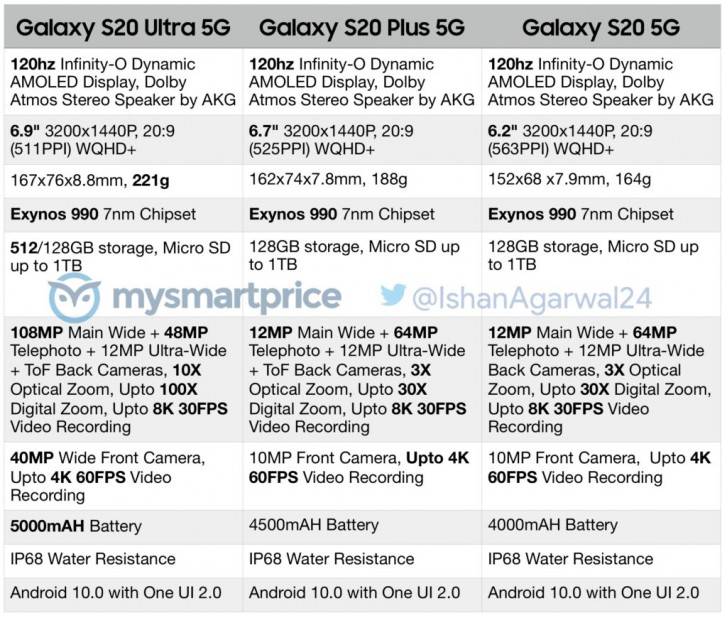 This model comes with a 6.2" 1440x3200 Infinity-O Dynamic AMOLED screen with 20:9 aspect ratio and a centered punch-hole housing a 10 MP selfie camera with support for 4K video recording at 60fps. The panel supports 120Hz refresh rate, but earlier rumors mentioned that you'll have to choose between that and the maximum resolution - as it will only be enabled if you switch to the lower 1080x2400.

The phone is powered by Samsung's own Exynos 990 chipset that's built using a 7nm process, and it gets 128GB of storage that's expandable via microSD. There's no word on the RAM amount, but past rumors talked about 12GB being the standard.

This phone is even bigger, coming with a 6.9" display - once again with the same features as the panel in the S20, including resolution and refresh rate.

There's an additional 512GB storage option, and a beefier 5,000 mAh battery. The camera system differs too. The selfie snapper in the centered punch-hole is 40 MP, still supporting 4K60 video.

On the back there's a 108 MP main wide sensor, a 48 MP telephoto, a 12 MP ultrawide, and a ToF 3D cam as well. You have 10x optical zoom and up to 100x digital zoom from this setup. This device measures 167x76x8.8mm and weighs a hefty 221g. Everything else is the same between the three models.

IMX 686 outperforms IMX 586, We can find comparisons in youtube.

Oh yes, the Mate 9 was really great. That was, when a Mate was still a Mate, before they started to shrink the width more and more, with Mate 10 and Mate 20... So I switched to a Honor Note 8, which I could get really cheap. Camera wasn't quite ...

I would agree. I have huge hands and I still had minor trouble using S10 non plus with right hand itself. This is by contrast even bigger...