The Galaxy S20 Ultra comes with the largest display on a Galaxy S-series smartphone, and one that matches the latest Note10+ in overall area. The 6.9-inch panel has a 3200x1440px native resolution in a 20:9 aspect ratio resulting in a 511ppi pixel density.

It's not the resolution that is the display's headline feature, however, - the refresh rate is. All S20s come with 120Hz refresh rates, the Ultra included. The one caveat, for the time being at least, is that you can only have the high refresh rate if you switch the resolution to 2400x1080p with only 60Hz available at the max resolution. The S20 Ultra does support 240Hz touch sensing, a feature it only shares with the ROG Phone II and a couple of Black Shark 2s in the smartphone world. Effectively, you need to pick between sharpness and refresh rate. The vast majority of people will not be able to notice the difference in sharpness, while the refresh rate is arguably more visually apparent. Then again, there are folks who wouldn't pick up the difference between 120Hz and 60Hz unless explicitly instructed to look for it.

We imagine there are battery life and performance considerations that led Samsung to not enable QHD at 120Hz mode. Regardless of the reasoning resulting in the resolution/refresh rate relationship, however, we'd appreciate being given the full set of options to do with them as we please.

Anyway, the Galaxy S20 Ultra's display is one of the brightest we've tested, pushing 894nits in Adaptive brightness mode, beating the Note10+ by a hundred nits and the iPhone 11 Pro Max by some 70 nits. If you disable the adaptive brightness toggle, you'd only get 400, though even with the toggle off, the phone will still opt for a boost if the ambient conditions are particularly bright.

Those values are for the Vivid color mode, while in Natural, the manually selectable brightness is about 30nits lower, though virtually the same 900-ish nits with Adaptive turned on. Switching resolutions and refresh rates didn't affect the brightness readings in any significant way.

Speaking of color modes, the Natural one is tailored to deliver accurate reproduction of sRGB content, and we measured an average DeltaE of 2.2 for our set of sRGB test swatches. Switching to Vivid, the S20 Ultra recorded an average DeltaE of 3.6 for our DCI-P3 targets, which can be improved to 3.2 by bumping the slider a notch to the mid-warm setting. We've seen marginally better results for accuracy out of Samsungs before, but it's not like you'll find reasons to complain about this display's performance in this regard.

The 'Dynamic' bit in the name hints at the phone's support for HDR10+, the royalty-free dynamic metadata HDR format that Samsung pushes next to DolbyVision. At the time of writing, both Netflix and YouTube will happily serve you HDR content.

The Galaxy S20 Ultra has a 5,000mAh battery inside, a number we're mostly used to seeing on lower-end smartphones marketed as battery champs. Samsung's never had an S-series smartphone with this big of a battery, only hitting the 4,500mAh mark with the relatively rare S10 5G from last year and the S10 Lite from a couple of months ago (which only technically belongs to the S-series).

There are two key reasons for the large batteries this year - the 5G connectivity and the 120Hz displays. Plus, the Ultra has quite a lot of that display too, so anything less than these 5,000mAh would have been too little.

With the display set to 120Hz, which seems to us like the way most people would choose to use the S20 Ultra, the phone delivers decent, albeit not spectacular endurance. Ten and a half hours on the web over Wi-Fi is just barely passable, while thirteen hours of offline video playback is on the lower end of the spectrum. For reference, the ROG Phone II (6,000mAh) delivers 13:22h of web browsing and 16:50h of looping videos in its 120Hz mode, while the OnePlus 7T Pro (4,085mAh) manages 12:03h and 18:15h, respectively, in its 90Hz mode. 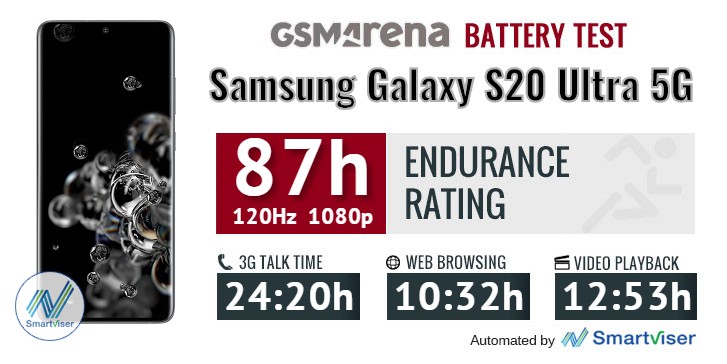 Switching over to 60Hz makes things look a little better. We operated under the assumption that if you're going to be sacrificing smoothness, it would be in order to use the full resolution of the display (once again, 120Hz is only available if running at 1080p), so we tested 1440p. Here we got 12 hours of web browsing and more than 16 hours of video playback. The 60Hz-only iPhone 11 Pro Max will last longer - to the tune of almost exactly 3 hours in either test. In 60Hz mode the ROG Phone II got us an astonishing 25+ hours of video and 15:28h on the web, while the OnePlus 7T Pro bumped its web browsing to 13h and remained at 18h for video.

The voice call endurance we measured over good ol' 3G (two gees lower than what the Ultra is capable of) was a good but unremarkable 24:20h. Compare that to the 7T Pro's 35 hours and the ROG Phone II's 40 hours, and it's not painting the Ultra in a particularly good light, though the iPhone 11 Pro Max' 21 hours put a different perspective. 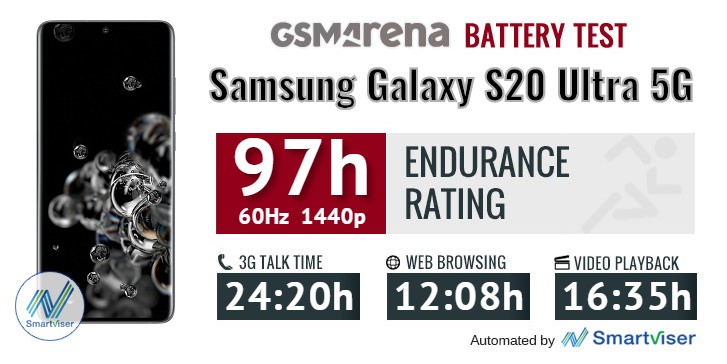 Our battery tests were automated thanks to SmartViser, using its viSer App. The endurance rating above denotes how long a single battery charge will last you if you use the Samsung Galaxy S20 Ultra 5G for an hour each of telephony, web browsing, and video playback daily. We've established this usage pattern so that our battery results are comparable across devices in the most common day-to-day tasks. The battery testing procedure is described in detail in case you're interested in the nitty-gritty. You can check out our complete battery test table, where you can see how all of the smartphones we've tested will compare under your own typical use.

Charging the Galaxy S20 Ultra is a speedy process with the bundled 25W charger. Starting from flat, we were looking at 64% at the half-hour mark, with a full charge taking 58 minutes. The Ultra does support 45W charging, but with the numbers we got out of the 25W one, plus the underwhelming results on the Note10+ with the 45W adapter, we can't imagine the Ultra will be significantly quicker to 100% with the more powerful unit.

As has been the case since the Galaxy S4, the S20 Ultra supports wireless charging. It's up to 15W on this one, there's no crazy 27W capability like you'd find on the Mate 30 and 30 Pro or the 30W on the Mi 9 Pro and recently announced 10 and 10 Pro. The S20 Ultra will also charge other devices itself - Samsung calls the feature Wireless PowerShare and it works at up to 9 watts - handy if you have a pair of Galaxy Buds+ and not a cable in sight, for example.

The Galaxy S20 Ultra has a stereo speaker setup where the main driver is a bottom-firing one, while the earpiece doubles as a secondary speaker and gets one of the channels in the stereo pair.

The phone returned one of the loudest overall results in our new Speaker test inching ahead of the iPhone 11 Pro. It's not quite up there with our de facto benchmark for loudness, the ROG Phone II, but it's still a 'Very Good' performance nonetheless. Having said that, the iPhone has notably more presence in the lower region, but the Galaxy has livelier and more vibrant highs.