The Galaxy S21 is equipped with a 6.2-inch display - the same diagonal as on the model it replaces. Samsung has gone for 1080p resolution on this year's non-Ultras, somewhat of a downgrade compared to the 1440p panels of the S20 and S20+. Having said that, on this relatively small panel, the 1080x2400 pixels you get (in a 20:9 aspect ratio) result in a perfectly good 421ppi density so everything is as sharp as you'd want it to be, even at the smaller text settings. 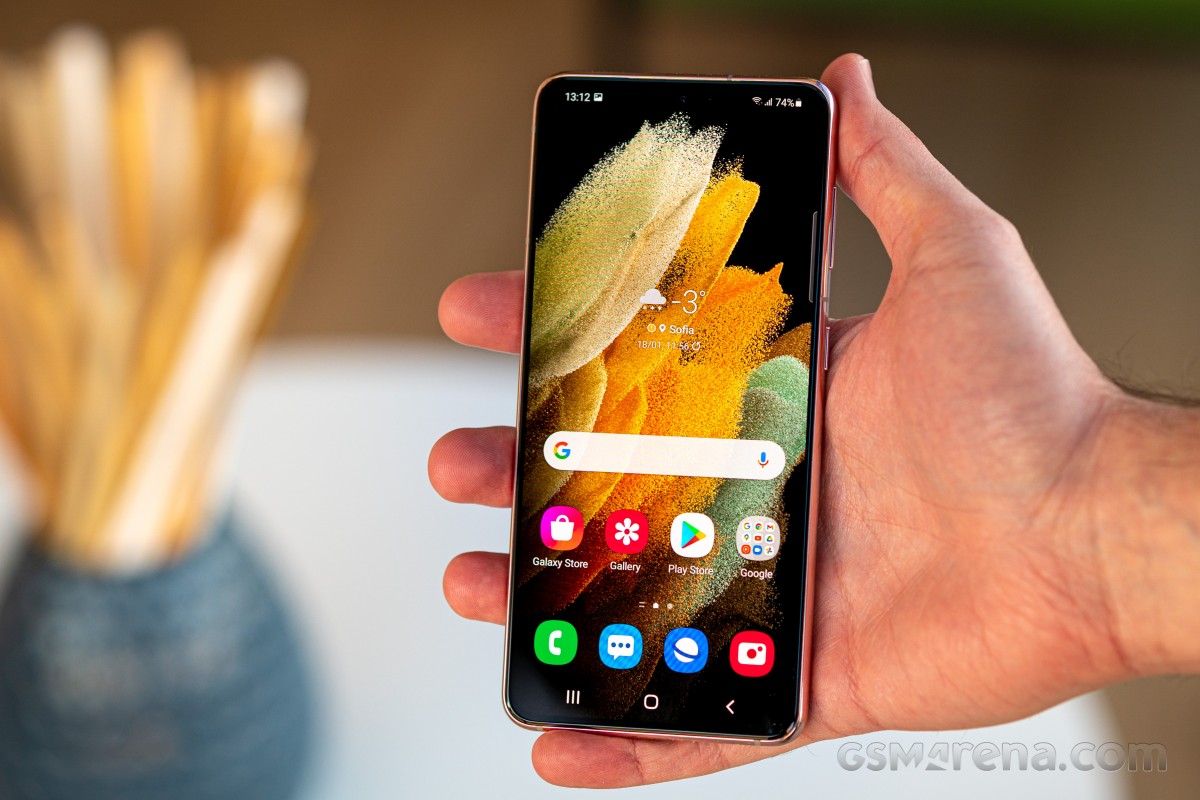 One upgrade compared to the S20 bunch is the Adaptive refresh rate mode, which replaces the High motion smoothness mode of yesteryear. Introduced on the Note20 Ultra, Adaptive mode adjusts the refresh rate depending on activity and content.

The S21 maxes out a buttery-smooth 120Hz, same as the S20, but should be able to go down to as low as 48Hz when it deems it appropriate, thus aiming to strike a balance between battery life and user experience. The S20 has no such smarts. Still, the S21 Ultra is capable of dropping the RR all the way to 10Hz, or at least, so the specs say.

The display is branded Dynamic AMOLED 2X, where the 2X indicates the high refresh rate capability, while the Dynamic part alludes to its HDR10+ support. Samsung says the S21 has a peak brightness of 1300nits, a bit below the promised 1500 number on the S21 Ultra and the Note20 Ultra. Those figures are for HDR video watching purposes and can't be attained when lighting up the entire display area - that's just how OLEDs work.

For our standard 75% test swatch coverage, the Galaxy S21 pumped out 416nits when adjusting the slider manually with the phone indoors in daylight. Placed under intense direct light, the S21 boosts its brightness substantially - to 856nits, and that works whether the Adaptive brightness toggle is on or off. Both results are in line with the competition in the high-end segment, and only the Note20 Ultra and the S21 Ultra are meaningfully brighter.

We're seeing yet another instance of the Vivid vs. Natural dilemma for dealing with color rendition. Vivid is the mode you get out of the box, and it's a wide color gamut mode with pleasingly rich colors. Here we measured an average dE2000 of 3.9 for our set of DCI-P3 test swatches, and a white point was shifted around 5 units off the mark - a slight blue tinge. That's in the default middle state of the cool-to-warm slider. Bump that one notch to the right, and the white point gets within just 2 units off-target, and the average deviation drops to 3.4. At the warmest setting, things do go into the yellowish territory.

Natural mode is your go-to option for accurate rendition of sRGB content. In this mode, we recorded an average dE2000 of just 1.3 and a white point with a barely noticeable dE2000 of 1.8 from the target. This goes with a notably muted overall presence, however.

A new addition this year is the Eye Comfort Shield. It's yet another implementation of a blue light filter which will adjust the display color according to the time of day (the default Adaptive setting), or let you pick a pre-set interval to engage and do so at an intensity of your choosing.

Circling back to the refresh rate handling, the S21 will remain in 60Hz for whatever it is that you're doing when you have the phone set to Standard - that's to be expected.

Opt for the Adaptive mode, however, and you'd be looking at 120Hz whenever you're touching the phone with a drop to 60Hz a couple of seconds after your last interaction. That's the general behavior for most things like the UI, browsers (Chrome, Firefox, Samsung's own) and social media apps (Facebook, Instagram, TikTok), and it is the most natural of approaches. 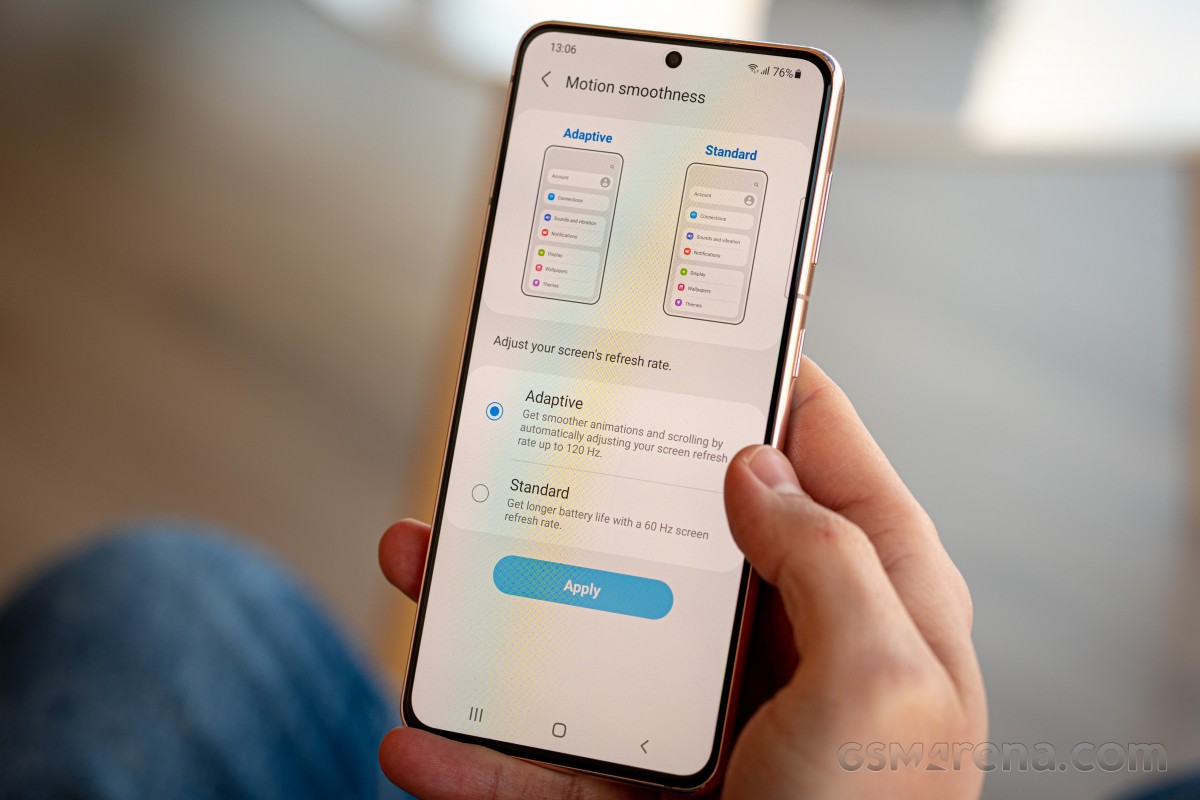 There are, of course, various exceptions. In YouTube, for example, the phone remains at 120Hz when you're playing back 24fps videos, but it does drop to 60Hz for 30fps and 60fps content. We gather the 120Hz for 24fps behavior has something to do with avoiding 3:2 pulldown for 24fps content in 60Hz (not that anyone's noticed an issue with that up until now), but why not 48Hz if the display supports it? Funnily enough, if viewing YouTube in a browser, the S21 will, indeed, switch to 48Hz. Could it be a YouTube app limitation?

As far as games go, the S21 will unlock its high refresh rate for many popular titles that are known to go above 60fps. Among the ones we tried and got 120Hz were Shadowgun Legend, Mortal Kombat, Dead Trigger 2, 1945 Air Force, Alto's Odyssey, and Pac Man.

Other refresh rate peculiarities include a 60Hz cap on the camera viewfinder - perhaps related to the sensor readout. There is also a 60Hz cap in Google Maps - perhaps Google's own doing there. Curiously, we get a 60Hz reading for the Always on Display - if there ever was a place where a 1/60th of a Hz was good enough that would be it. Though, on second thought, there could be potential burn-in related concerns that mandate refreshing those pixels every now and then.

The Galaxy S21 draws power from a 4,000mAh battery, the same capacity as last year's phone. With the same screen, a newer, more efficient chipset, and an adaptive refresh rate display, logic dictates that the S21 will have at least a little bit better endurance.

We carried out these tests in the Adaptive refresh rate mode, while constantly monitoring the current refresh rate thanks to Android 11's built-in tool. Our web browsing script refreshes pages every 10s and every refresh triggered a spike in the refresh rate to 120Hz which then dropped back down to 60Hz 1-2s later. We reckon that's a behavior fairly representative of real-world use - you swipe on the screen, refresh rate shoots to 120Hz, you then read for a bit, it goes down. As for the video playback, the phone maintained a 120Hz refresh rate throughout the test - since it does actually do that when playing back 24fps content, we think that this, too, is a good representation of real-life usage.

With all that in mind, we arrive at an overall Endurance rating of 93h for the Samsung Galaxy S21 5G. 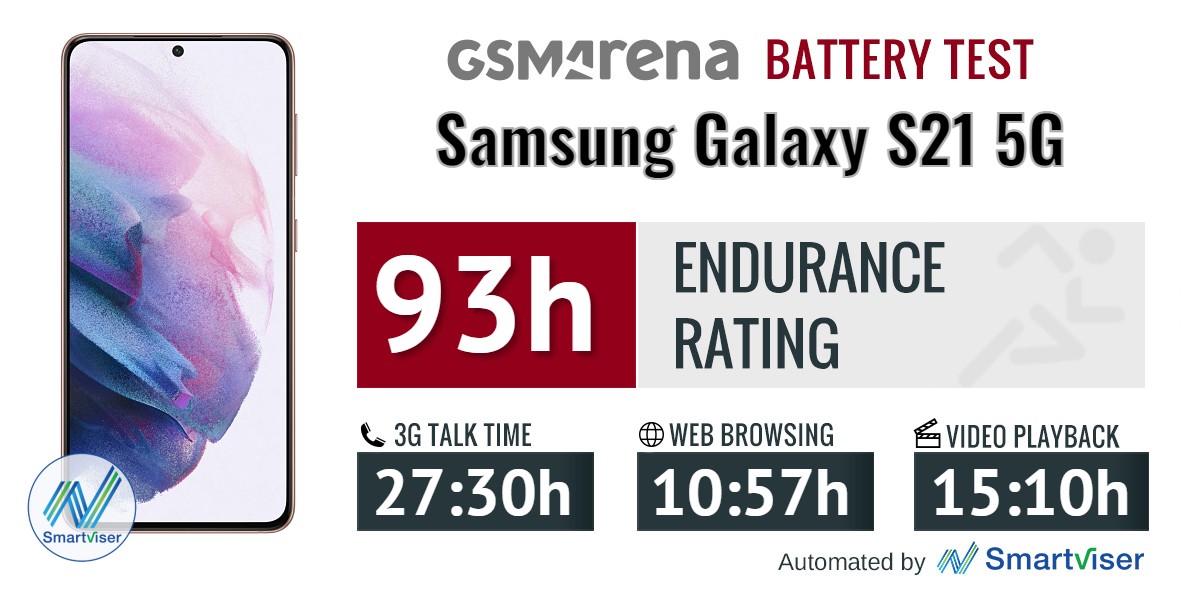 Our battery tests were automated thanks to SmartViser, using its viSerDevice app. The endurance rating above denotes how long a single battery charge will last you if you use the Samsung Galaxy S21 5G for an hour each of telephony, web browsing, and video playback daily. We've established this usage pattern so that our battery results are comparable across devices in the most common day-to-day tasks. The battery testing procedure is described in detail in case you're interested in the nitty-gritty. You can check out our complete battery test table, where you can see how all of the smartphones we've tested will compare under your own typical use.

On to a painful subject - charging. The Galaxy S21 comes with no charger in the box, so you need to supply your own. The bundled USB-C cable assumes you're going to have a USB PowerDelivery adapter or one of the later QuickCharge 4 cross-standards units. If you have an older source of juice, you'd better have a USB-A-to-C cable to go with it as well.

The S21 supports USB PowerDelivery with PPS on top for up to 25W of power. The 45W charging capability was only a thing on the Note10+ and the S20 Ultra, and Samsung subsequently scrapped it. It's not that anyone would miss it - the 45W adapter wasn't meaningfully faster than the bundled 25W one, and you needed to buy it separately. Okay, that last argument falls a little flat now that the 25W one comes at an extra price too. 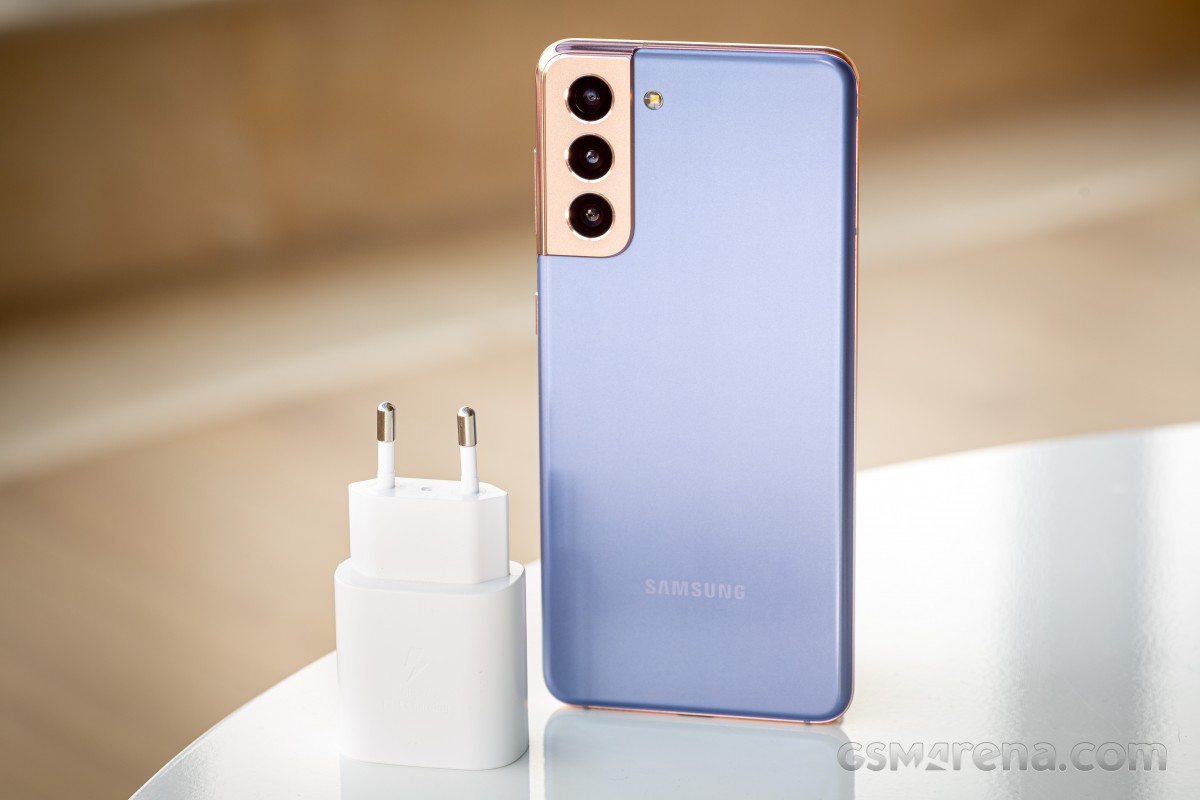 Mind you, Samsung mentioned a reduced price for this 25W adapter going forward; we'll see how that pans out. It was already available for a very reasonable €13-ish this Christmas at third-party retailers, cable included, but MSRP varies wildly from a relatively sensible $20 in the US, through an already steep €30 in France, to an I'm-not-paying-for-this €35 in Germany.

Anyway, we clocked how the S21 behaved with this 25W unit to see the best-case scenario. A thirty-minute charge from flat will take you to 55%, with a complete top-up, requiring 1:13h. The half-hour result is identical to what we recorded on the S20 last year, though a full charge now takes a good 10 minutes longer for whatever reason. You can expect the same speed with any good PD adapter rated for 25W or more, with PPS support. If you're going to be reusing whatever you dig up from the bottom of the drawer, you'll need to wait a bit longer.

We also tried an 18W QuickCharge 3.0 adapter we had lying around - sort of like the middle of the drawer option, so to speak. The 40% result at the half-hour mark is low in the current landscape, as is the 1:25h to a full charge but it is perhaps something you could live with just fine, depending on your charging habits.

The Galaxy S21 supports wireless charging too, at 10W+ (as per its specsheet) with compatible pads of which Samsung sells a bunch. The phone itself will also charge other devices wirelessly off of its back at up to 4.5 watts - Wireless PowerShare Samsung calls it. You get to pick a cutoff point below which the phone will refuse to PowerShare (30% to 90% in 5% increments).

Also, in settings you get a toggle to enable/disable Fast charging (off by default), the Qualcomm QuickCharge 2.0 compliant Adaptive Fast Charging of old. That's the standard that Samsung had been using for ages before it adopted Super fast charging - the current PD based solution, for which you get a toggle too (this one is on by default). A third toggle lets you disable Fast wireless charging in case, for example, you have a pad with active cooling or blinking LEDs next to your head at night.

The Galaxy S21 adopts what's become Samsung's default way of dealing with speakers on flagships. The earpiece serves double duty as the second speaker, joining the main one located on the bottom. With the phone in portrait orientation, the top speaker handles the left channel, while in landscape, they'll make sure they're observing the correct channel orientation.

We're hearing very clean and pleasing vocals and tingly highs, but we're not hearing much in the way of bass. The iPhone has notably more thump in the low register, though it's nowhere as nice higher up the frequency range.