The Samsung Galaxy S4 brings the second resolution bump in the family (after the S II and S III, which were both 8MP shooters). The 13MP camera captures photos of up to 4128 x 3096 pixels. There's a 2MP camera on the front and they can snap a photo or record simultaneously.

The user interface is based on the Galaxy Camera interface. The viewfinder is handles both still and video capture, so you don't have to switch modes. However, this is certainly not the most convenient solution as, if you're shooting full resolution 13MP photos, you'll have to frame your videos using a 4:3 viewfinder.

Anyway, the cool settings are found in two places. The first is the Mode button under the shutter keys. It brings up a carousel with different shooting modes, each mode comes with a descriptive image and text. When you get familiar with those modes, you can switch to the grid, which drops he text but is faster.

There are more settings in the top left corner, but they won't be used very often. Still, there a number of interesting options here like the setting for the volume rocker to act as a still shutter key, a video shutter key or a zoom lever. The HDR mode (Rich Tone) can be set to save a normal and an HDR photo or just the HDR one. Another interesting option is contextual file names - the Galaxy S4 will name photos with your location (the GPS needs to be on for this to work).

Color effects get a live preview

One thing we did notice is that there are fewer manual settings - the Galaxy S II and S III used to let you tweak all photo parameters, while the Galaxy S4 just gives you an ISO setting.

Let's go over the different modes. There are standard modes like Rich Tone (HDR), Panorama, Night and Sports. Panoramas are pretty impressive, they go a full 360° circle or more and can be as big as 60MP (note that if you hold the phone vertically, the panorama image will have nearly more than twice the resolution). Here's a sample panorama - the stitching isn't perfect and we have shots with even more problems.

Other modes we've seen on previous Samsung phones like Best Photo and Best Face, which snap multiple photos and let you pick the best one (in the case of Best Face, you can tweak each face in the photo individually). Beauty Shot does some automatic beauty touch up.

Then we get into the more interesting shots. 360 photo is Samsung's name for Photo Sphere, which creates a spherical panorama, similar to those in Street View. Eraser helps you remove moving objects (e.g. tourist waling into your shot).

Drama mode takes a moving object and clones it several times. Note that the resolution for this mode drops to 1080p. Another way to capture moving objects is Cine Photo, which creates cinemagrams. The result is an animated GIF file, though we have to say we liked Nokia's implementation better.

Sound & shot captures a photo and records ambient sound. It sounds pretty cool - for example, you can hear the sea gulls in a beach photo or the roaring of car engines if you're at a race - but we had problems sharing the shot. All the Galaxy S4 would send is the still image, a JPEG, and the sound remains on the phone. Shame that Samsung didn't use the standard Audio note feature of JPEG photos for this one.

One important shooting mode that's not found in the carousel is double shot. It snaps a photo with both the front and the back camera, so the person holding the phone can be in the shot too.

Just like in LG's implementation, you can choose which camera shoots the inlaid picture.

All these modes sound fun, but is the Samsung Galaxy S4 camera good? The short answer is yes, yes it is. Samsung have done a great job at keeping image quality good while increasing the resolution and making the phone thinner.

Photos have a lot of fine detail and very little noise. Pixel peepers will notice oversharpening halos, but it's nothing drastic. Colors are accurate if slightly oversaturated and white balance is somewhere between neutral and cold (typical for Samsung phone cameras). The S4 preserves detail in the shadows, sometimes at the cost of detail in the highlights. You can use the HDR mode to remedy this.

Update, April 12: We got our hands on a retail unit of the Galaxy S4. Here are some samples shot with the market-ready Galaxy S4:

The Samsung Galaxy S4 faces off with the 13MP flagships in our Photo quality compare tool. You can also pit it against the last generation of flagships with 8MP cameras using the upscale and downscale features of the tool.

Video camera has room for improvement

The video camera doesn't have many fancy shooting modes like the still camera, but dual shot is available and you can do slow-motion and time lapse videos. Slow-motion videos can go up to 8x slow down, but resolution drops to 800 x 450 and framerate to 15fps. Time lapse videos can speed things up to 8x, with resolution and framerate remaining at 1080p @ 30fps (time lapse actually requires less processing power than regular video capture).

Touch focus is available before and during video recording and you can switch back to continuous autofocus if you prefer. You can capture 9.6MP (16:9) photos during recording as well.

Videos captured with the Samsung Galaxy S4 have a good of fine detail and little noise. Colors and white balance are similar to those in still images, overall accurate but slightly oversaturated and with a cooler white balance.

One thing that made a negative impression was the narrow field of view - it's narrower than that of the Galaxy S III and the HTC One. 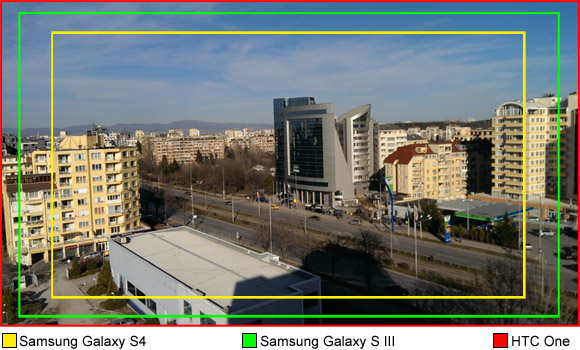 We were also surprised to find that the video quality, good as it might be, is not much better than that of the Galaxy S III. You can verify not just by looking at the following samples but also by jumping to the Video compare tool below.

Here's a FullHD video sample we uploaded to YouTube.

Update, April 12: We got our hands on a retail unit of the Galaxy S4. Here are a 1080p video sample shot with the market-ready Galaxy S4:

Here is an untouched video sample from the Galaxy S4 you can download.

Surprisingly the Galaxy S4 videos get way more detailed when we turned on the digital video stabilization. Footage gets more detailed and contrast improves, which is pretty odd considering that we use a tripod for shooting those, so stabilization shouldn't matter a jot. It's obviously some kind of processing issue that Samsung needs to address with a future update.

For now we'd recommend keeping video stabilization on, as long as you are not bothered by the field of view, which gets even narrower. 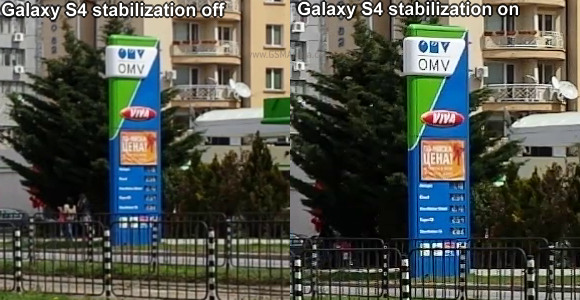 Here is the Galaxy S4 sample with the stabilization turned on:

Here is an untouched video sample with video stabilization from the Galaxy S4 you can download.

You can also take a close look at the quality of Samsung Galaxy S4 videos in our Video quality compare tool.