The Samsung Galaxy S4 Active has made yet another appearance on the web - this time with AT&T livery on. A press image of the yet to be announced smartphone has emerged, showcasing the handset with the AT&T signature globe on its back cover. 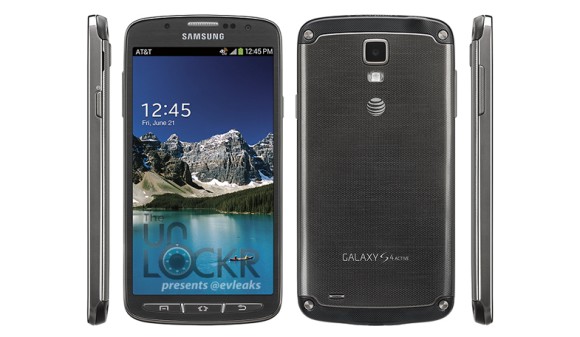 As we already know from the previous leaks, the rugged Samsung Galaxy S4 will sport a 1.9GHz quad-core CPU made by Qualcomm, 5" 1080p display, and an 8MP main snapper. The latter is a downgrade from the 13MP shooter of the regular Galaxy S4.

Judging by the date on device's homescreen in the press image, the Samsung Galaxy S4 active for AT&T might hit the shelves on June 21. This is only a day after Samsung's scheduled event in London, where the smartphone is expected to go official.

Will it have wireless charging built in and ready to go out of the box? I'm assuming the charging port has a seal on it. Reducing wear and tear on that will go a long way in making the phone last. I'm annoyed the S4 still doesn't have the charging...

i would imagine that the updates will be pretty close to each other, there should not be to much different in the way of features they are more likely to be tweaks, unless a full new firmware revision, I.E android 4.3 or KLP so you should not be con...

Trolls, they will have the same update,