The Android smartphone market in 2013 is as over-crowded as ever. But when it comes to the very high-end, luckily for everybody, there are not that many options. Every manufacturer has a single flagship and that's it. Or is it? Last time we checked, Samsung has been selling not one, but two flagship smartphones and to make matters worse, they both go under the name of Galaxy S 4.

Potential buyers are left scratching their heads as both versions are priced about the same, with prices varying only negligibly from market to market. And both handsets are virtually indistinguishable from one another, too. 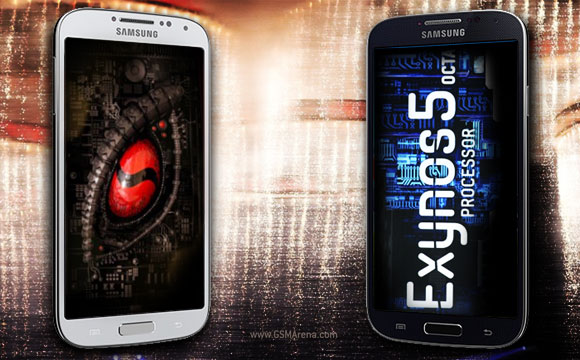 The Galaxy S4 Octa is available only on a few select markets, and the Snapdragon 600 version is shaping up to be what we like to call the "international" model. Despite what some would have you believe, the reason for pushing the (initially intended only for the US) Snapdragon version to international markets is not its exclusive LTE support. It seems both chipsets are perfectly capable of providing LTE connectivity. It's manufacturing issues that Samsung is blaming for the low production numbers of its home-brewed Exynos 5 Octa chipset. This is the reason behind the shift of the Snapdragon 600 into being the more widely available offering.

We finally have the two versions on our proverbial desk. All that's left is to see whether the different brains also mean different hearts and souls. That - we'll only be able to tell, after we're done with this shootout. So you are welcome to join in. One thing's for sure, both of these are some of the fastest smartphones to have set foot in our office and we better hurry up so we can catch up.