Less than a day after we saw it get unboxed, Samsung took the wraps off the Galaxy S4 LTE-A. Dubbed SHV-E330S, the newcomer is available for SK Telecom in Korea. It is the first device, capable of reaching network speeds of up to 150Mbps on the carrier's brand new LTE-A network. 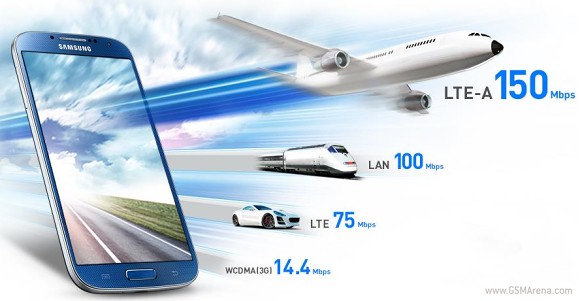 Available in Blue Arctic or Red Aurora color scheme, the Samsung Galaxy S4 LTE-A features the same design as its I9500 sibling. Measures of the LTE-A are 136.6 × 69.8 × 7.9 mm, while its weight tips the scale at 131 grams - one more than the international version.

The main difference between the Galaxy S4 LTE-A and the version we are familiar with already is the presence of a more powerful Qualcomm Snapdragon 800 SoC under the hood. The rest of the specs are familiar - they include 5" 1080p Super AMOLED display, 13MP camera, 32GB of built-in memory, microSD card slot, and IR port.

Expectedly, the Samsung Galaxy S4 LTE-A will be priced higher than its "plain vanilla" sibling. There no information on the handset's availability for more markets or carriers for the time being.

Love the red/burgandy Samsung Galaxy S4 LTE-A My carrier Rogers here in Canada has a 4G LTE network and I sure hope this phone comes to Canada. I love all my Samsung products. They are the best.