The first official photo of the Samsung Galaxy S4 Zoom has surfaced courtesy of Sammobile. In addition, the cameraphone has appeared in live photos, showing its dedicated camera button from up close. 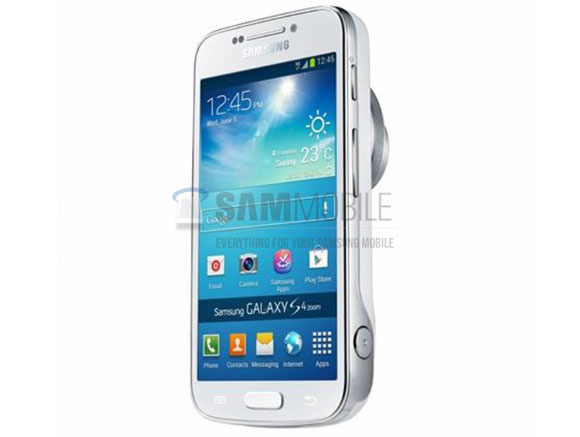 The Samsung Galaxy S4 Zoom (CM-101) looks to be based on the Galaxy S4 mini and is going to be able to place calls. In contrast, the Galaxy Camera wasn't able to make calls due to its locked baseband radio.

Built around a 4.3" qHD Super AMOLED display, the Galaxy S4 Zoom is rumored to pack a 1.6GHz dual-core processor, 1GB of RAM and run Android 4.2.2. The main attraction is going to be the 16MP camera at the back, which is purported to feature 10x optical zoom.

Internal memory is suggested to be 8GB, and is going to be expandable with up to 64GB microSD card. Connectivity options include Wi-Fi a/b/g/n, Bluetooth 4.0 LE and GPS.

The right side of the device houses the lock/unlock button, volume rocker and shutter button.

Samsung officially announced its London event on June 20, and the Galaxy S4 Zoom is expected to be one of the stars at the show.

Which is best phone for games and for every thing ... Samsung galaxy siii or galaxy s4 zoom ?

does the game play on this phone (galaxy s4 zoom) ? Like temple run / subway surfers /etc....

Lmao! Such hate. jealous trolls never quit. Why don't you wait until the camera results before going on like some sort of know it all psychics spreading lies and hate?