Analytics company IHS has released its teardown report of the Samsung Galaxy S5, which also reveals an estimate of the phone's bill of materials (how much its parts cost). The Galaxy S5 costs Samsung about $256 to build, which is just slightly more than what the Galaxy S4 cost back in 2013 - $244. 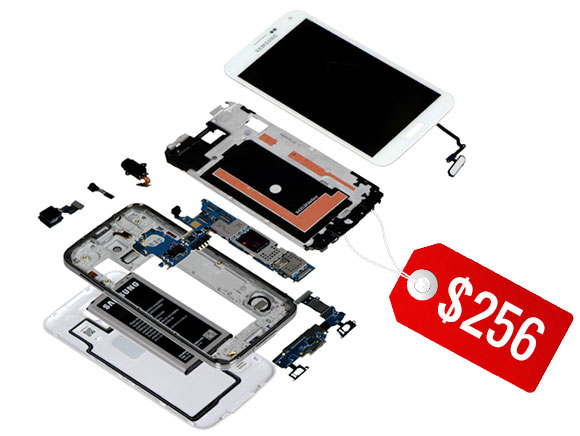 The most expensive component in the Galaxy S5 is its 5.1" full HD Super AMOLED display. It costs $63, which is $12 cheaper than the 5" one of the Galaxy S4. It appears that Samsung has managed to streamline its display production to achieve the lower price. The DRAM and flash memory of the Galaxy S5 cost $33 combined.

Interestingly, according to IHS the fingerprint sensor in the Galaxy S5 costs just $4, which is significantly less expensive than the one found in the iPhone 5s. Apple spends $15 for each one they place in their current flagship phone, which carries a $199 bill of materials.

Lastly, Galaxy S5's heart rate biosensor is made by chipmaker Maxim and adds $1.45 to the cost of the device. IHS estimates the cost of assembly is $5 per device.

Be wary that while this component price estimation gives a neat overview of the phone's cost, it doesn't include R&D, software, distribution and marketing costs.

Does this BOM price includes huge discounts phone makers have when ordering bulk and from the same company for years? I suppose when you order milions of Snapdragon chipsets and you are doing this for years,then you dont pay the same retail price a...

Actually, nothing you said is true, Samsung makes phones that are 60$ more expensive than currect iphone 5s to make, and yet they lower the selling price of their phone, unlike apple does, apple is constantly keeping the price up even when you dont h...

Unfortunately, this increasing trend of the cost of manufacturing will translate into higher prices. So, S6 would be costlier than S5, which is already carries an hefty pricetag :( http://goo.gl/OfS1Eq