On its own, the Samsung Galaxy S5 mini is a merely a good midrange smartphone. Next to it's bigger sibling - it's probably Samsung's best mini to date. It retains what makes the bigger flagship desirable and cleverly mimics its superb performance so that it's easy to think the raw hardware power is equal.

Samsung has made this smartphone snappy thanks to good software optimizations. The proprietary feature list is also pretty long as is usual for Samsung smartphones. The motion gestures are here, even if the air ones aren't available, the IR blaster is here as well - we only wish HTC had provided one for their mini smartphone. 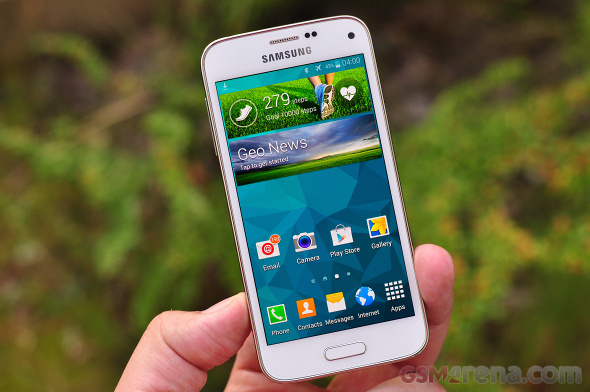 The camera does a good job, even if it can't compete with the excellent 16 MP snaps from the Galaxy S5, the display is also up to snuff despite the lower resolution. At 4.5" we can't really say the display is small.

Samsung has executed the hardware and software of this Galaxy remarkably well. The price isn't as competitive as one might expect, though. Samsung asks around €370 for the Galaxy S5 mini, which in comparison with the €500 asking price of HTC for their One mini 2 at the time of launch, looks sane but still puts the Galaxy S5 mini at a disadvantage. Perhaps Samsung is hoping the Galaxy S5 mini will ride the sales wave of the Galaxy S5 and still come out on top.

Still let's take a look at the competition. Sony is probably the strongest of adversaries for Samsung in the mini sphere, although Sony makes its phone under the Compact moniker. The Xperia Z1 Compact has a slightly smaller display at 4.3" but it is of the same resolution and offers great quality. The water resistance is better with immersion possibilities beyond 1m, the camera is smarter and the Snapdragon 800 chip inside the Z1 Compact wipes the floor with the Exynos chipset used in the Galaxy S5 mini. The Z1 Compact is also currently cheaper.

You're probably wondering what an old Xperia SP is doing in this conversation but it boasts a still-capable chip, a bigger 4.6" display, a bigger battery and a much lower price tag.

Now that it has received a well-needed 30% price cut off the launch price, the HTC One mini 2 is on equal footing with the Samsung Galaxy S5 mini, price-wise. The display is the same size and resolution, the battery is of the same capacity and the chipset is equal in terms of processing performance. The HTC One mini 2 has a bit less RAM but compensates with a higher resolution camera. Its speakers are superior to those of the Galaxy S5 mini on placement and quality, if not on loudness. The One mini 2 looks better and has higher quality materials but it is noticeably taller - in fact, it's as tall as last year's HTC One.

Motorola is en route to bringing us the Moto X+1 and G2 but for the time being here are two droids with the latest Android software that can easily compete with the Galaxy S5 mini - both have 720p panels with the Moto X display being larger and also AMOLED. The most important criteria here is price - both a much cheaper at the moment.

The LG G2 mini can't compete on display quality or water resistance but it has a bigger screen panel, a much larger battery and it is around the same size as the Galaxy S5 mini. Currently the G2 mini is dirt cheap in comparison as well.

The Samsung Galaxy S3 Neo is a new variant of the popular, now-aged Samsung Galaxy S III, and has the same 4.8" 720p Super AMOLED, 8MP snapper, expandable storage but is currently dirt-cheap as well and can be had for 100 Euro less than the Galaxy S5 mini.

The Samsung Galaxy S5 mini is better than its predecessor on almost all fronts. It's 50% more expensive so if you fancy a small Galaxy with a Super AMOLED screen at a reasonable price the Galaxy S4 mini might be it, even if it is pricier than the Moto G, G2 mini and Xperia SP.

When the competition is this good, the user is the one that benefits the most. And it's not all about the price or features - many people go for the mini because it looks like the phone it takes after - in this respect the Galaxy S5 mini is a copy-pasted lookalike of the Galaxy S5, so that's one job done.

The LG G3 mini is still nowhere to be seen and so is the latest Xperia Compact phone. And the HTC One (M8) isn't doing as well as, which leaves the Galaxy S5 mini at a very advantageous positon.

Samsung had to bring a decent port of its flagship phone to a smaller size and throw in one or two key features to make it work. It's what the company did a year ago and what we expected this year. But it did way better than that - the Galaxy S5 mini is as close to the Galaxy S5 as a mini Galaxy has ever been so far.