Samsung Galaxy S5 mini has just leaked via the company's official UK webpage. Apparently this is either a placeholder that is already removed or the link is accessible only by users with the appropriate credentials. 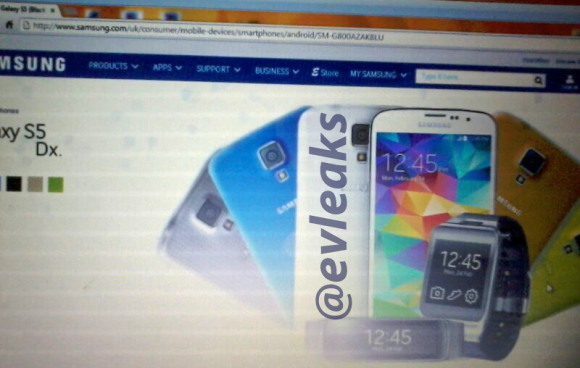 Anyway the Galaxy smartphone in the snapshot is SM-G800, which has already been confirmed numerous times to be the model number for the Galaxy S5 mini. We've already saw the mini version leak via official Samsung support pages, a case maker and its full specs got tipped too.

What the picture tells us? Obviously the Galaxy S5 mini, Galaxy S5 Dx, or whatever Samsung choose to call it, will retain the same design as the Galaxy S5 flagship. It will come with even more colors though - white, black, blue, yellow and gold. Naturally, it will be compatible with the newly released Gear 2 and Gear Fit wearable accessories, but it will come without the heart rate monitor that its bigger brother packs.

There is no information when the Galaxy S5 mini will go official. If this snapshot is indeed true and Samsung is prepping the device's official pages, then the premiere should happen very soon.

It is baffling despite Samsung's phones looking cheap and made out of plastic, the interest it generates is very high. My demand is they should go for premium look of the Htc one M8, and they will be invincible.

Samsung Galaxy s5 series without a cover is disgusting :).

Apple's design chief has been given more power in the company. Samsung just fired its design chief of the SGS5. What do you think Samsung thinks of its SGS5 design? I bet you it would be different to what the Samsung fanboys are thinking. ...