The choice of a lower resolution sensor works against HTC in video capture too. Last year a 4MP sensor was acceptable for video capture, but flagships now record 2160p video, which is equivalent to 8MP. HTC's sensor is only 1520px tall, while 2160p video (as the name suggests) requires 2160px vertically.

Penetration of 4K TVs is still relatively low, but is set to explode in the next couple of years. Having more pixels on the sensor to render 1080p video should also be advantageous.

The Samsung Galaxy S5 does indeed provide a much sharper video than the HTC One (M8) at 1080p. Switching to 2160p makes the difference in resolved detail overwhelming. One (M8)'s lower dynamic range also affects the image quality and, colors don't look great either. We looked at the encoding parameters of both videos for a potential explanation of the difference in image quality. It turned out that the HTC One (M8) uses a higher bitrate (nearly 20Mbps) than the Galaxy S5 (17Mbps). Both videos used the same encoding options (AVC High@L4.0, 1 reference frame).

HTC does use higher audio bitrate, 192Kbps, versus 128Kbps for the Galaxy.

For 2160p video, the Galaxy S5 jumps to 47Mbps, which means the same length video takes up nearly three times as much internal storage.

Both phones can shoot 60fps video at 1080p resolution. That's a lot more accessible - while you can't share them on YouTube, 1080p @ 60fps videos will play just fine on your current HDTV.

The Galaxy S5 bumps up the used bitrate to 28Mbps, more than doubling it to handle twice the framerate. The HTC One (M8) bitrate remained unchanged, meaning each frame has to be encoded in half the space. Despite that, the apparent video quality doesn't seem to degrade much. Just like the still cameras, the video cameras of both phones can record HDR video. Note: we used 1080p mode on both phones.

The inherently wider dynamic range of the Galaxy S5 makes a difference while the mode is off and it surely helps when we switch it on. The phone brought out more detail in the shadows, but left the highlights untouched. The colors become too oversaturated for our liking though.

The HTC One (M8) manages its colors better, but HDR mode has a noticeable detrimental effect on the image quality. Jaggies appear, which indicate the internal processing might be done at less than 1080p. It's not done at 30fps either, HDR videos came out with 28fps framerate.

Worse still, the extra detail in the shadows comes at the price of a lot of noise, while the highlights remain as burned out as with HDR off.

In short, both phones have their woes but enabling HDR mode on the Galaxy S5 does more good than bad (if you can live with the colors). The jaggies and noise the One (M8)'s HDR mode introduces, plus its inability to fix highlights make it more trouble than it's worth. 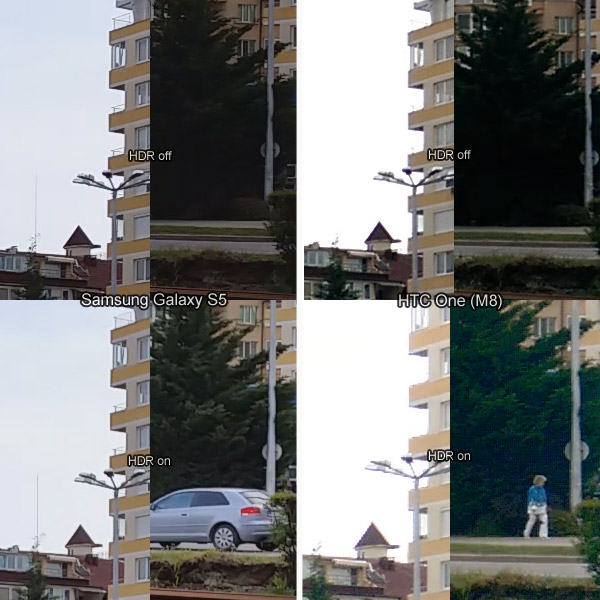 Winner: Samsung Galaxy S5. The 2160p mode alone might have been enough for the Galaxy S5 to win, but this test showed the HTC One (M8) lags behind in 1080p mode as well. The 60fps and HDR tests also went in favor of the Galaxy.

HTC's saving grace last year was good low-light, but this year Samsung has a new sensor, which is not only larger but also has design that promises improved low-light performance. Big pixels are just one way to improve low-light performance, smaller pixels on a better sensor is another - those are the two approaches taken by HTC and Samsung, respectively.

HTC left the sensor design unchanged and removed the optical image stabilization, which allowed the phone to do longer exposure times. The company did add a dual LED, dual-tone flash, which should be brighter and offer better color rendering.

The shots were taken with the phone in the hand, where an OIS-enabled camera would have had an advantage, but neither the Galaxy S5 nor the HTC One (M8) have that feature.

For these crops, we downscaled the photos of the Galaxy S5 to 4MP. Its higher resolution once again allowed it to capture more detail than the HTC One (M8). The white balance leans a little towards red, but the HTC's white balance isn't spot on either. 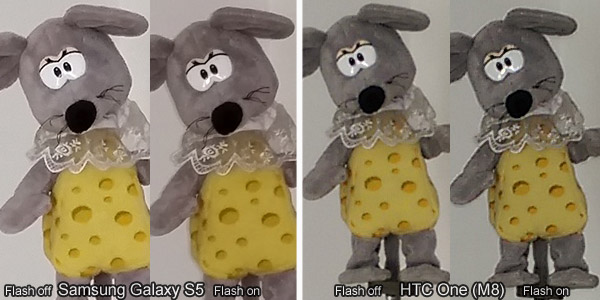 Using the exact same lighting setup, we recorded two short videos with each phone - with the flash tuned off and with the flash turned on. The videos were shot from the hand and we used 1080p for the Galaxy S5, again because it's better to go with the lower resolution when there isn't enough light.

At the distance we shot our object (about 5 feet), the flash made little difference. You can notice a slight increase in contrast, but that's about it. HTC's dual-tone flash once again fails to provide an accurate white balance. The Galaxy S5 was off the mark too.

The fine detail starts leveling off, though the Galaxy S5 retains a small advantage. It also provided the brighter videos, though the contrast wasn't as good as on the HTC. The One (M8) videos were quite dark but they did have a bit more detail thanks to the contrast and the stronger sharpening (which is also more noticeable). 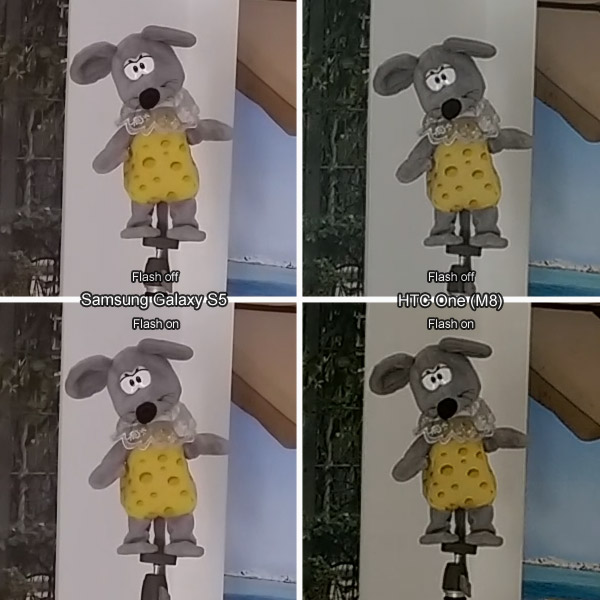 Winner: Samsung Galaxy S5. The HTC One (M8) started closing the gap here, but its sensor is over a year old now and it doesn't cut it anymore. Samsung's ISOCELL sensor performed rather well, while HTC's dual-tone camera didn't do much to improve color accuracy.