Honestly, a walkover for the Galaxy S5, but anything different would've been a massive surprise. Scratch that - a letdown. The gap between release dates has seen these two flagships on either end of a seesaw - and it's LG's turn to touch the floor. Nothing out of the ordinary and... well... they'll be the first to bounce back. 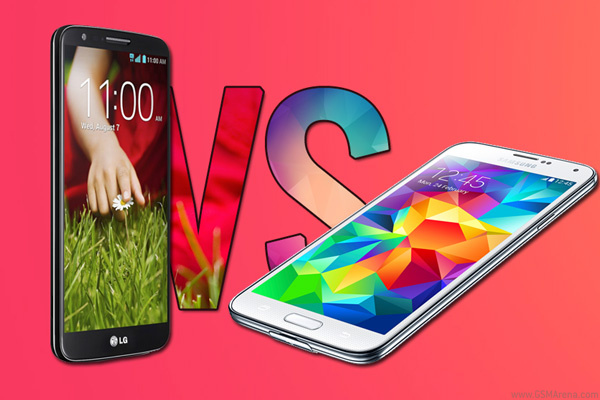 This is not to say that the G3 - if LG keep on counting up - will kick the Galaxy S5's butt but we'd like to see it try. Delighted if it succeeds. In many ways though, the Galaxy S5 does to the Galaxy S4 exactly what the LG G2 already did - and then some. No wonder then, LG are on the list of casualties this time too.

The improved AMOLED panel, latest Snapdragon 801, waterproofing, the fingerprint scanner, bigger camera sensor and 4K videos. Everyone's free to not even count the heart-rate monitor and the updated TouchWiz (the Homescreen modes and the option to fingerprint-secure content are great).

And hey, this is nothing like a few years ago when hardware was booming and each year brought upgrades we thought impossible the year before. The improvements are becoming subtler and new additions are easily dismissed as gimmicks - until manufacturers really try hard to make them count.

Even on the exterior design front, we haven't been wowed in a while - what most makers do is improve and refine rather than invent. The rear buttons of the LG G2 are probably the closest to real innovation we can think of.

That said, regardless of how you feel about faux leather, the Galaxy S5 had no problem winning the design battle. And that has nothing to do with aesthetics. The accessible battery and expandable memory in a waterproof body were enough against a handset with a sealed battery and no memory card slot. And that's not even counting the fingerprint scanner, which has its uses.

From then on, we can hardly blame the LG G2 for failing to respond to the upgrades and improvements of the more recent Galaxy S5. The new AMOLED display proved superior in terms of color reproduction, contrast and outdoor performance. To be fair, it looks like any screen will have trouble matching the outstanding quality of AMOLED in the Galaxy S5.

The latest TouchWiz got the better of Optimus UI but the latter will likely see another upgrade before gracing the next LG flagship. The camera department was another straightforward win for the Samsung - a bigger and higher-res camera sensor, 4K videos and hybrid focus against OIS.

The upgraded chipset - Snapdragon 801 against the "older" Snapdragon 800 - saw the Galaxy S5 come out on top in just about every synthetic benchmark we ran.

The battery life and better codec support helped the LG G2 snatch a couple of wins, but overall the six-month gap between the two is not to be downplayed.

Whether or not this will work in LG's favor another couple of months down the road remains to be seen. And mind you, the one-way traffic here was pretty much expected but not as bad when you factor in the price.

The G2 wasn't in this match solely for the amusement of onlookers. A good 200 euro cheaper, it is still a credible premium package, and sufficiently future-proofed. LG did the G2 a favor by delivering the KitKat update just before the Galaxy S5's release. Ultimately, it's whether the water-resistance, fingerprint scanner, new imaging hardware and the latest chipset are worth that much to you. The other improvements are harder to put a price on but add to the overall experience.

You can do your own math of course, and if LG does theirs right, we'd hate to be in the Galaxy S5's place in the next edition of this head-to-head. No need to tell you, we can't wait for the re-match.