We were a little wary of comparing a phone with a phablet, but the lines are so blurred these days the distinction is quite arbitrary. Certainly as things grow bigger, each extra millimeter has less of an impact. Still, some will prefer the more compact frame of the Samsung Galaxy S5, while others the larger screen of the Oppo Find 7a.

In terms of market share, Oppo is clearly the underdog but its Find 7a phablet proved anything but. Its physical build is great (and a breath of fresh air after all the similar-looking Samsungs) and its software is nearly as rich as the heavyweight TouchWiz package. 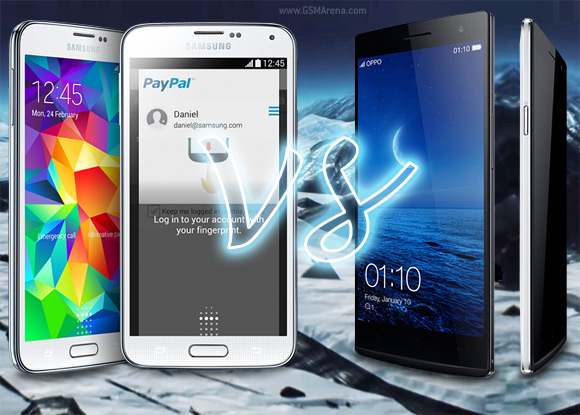 It was a small surprise to see the Find 7a perform as good as it did on the benchmarks - on paper, the Galaxy S5's chipset is supposed to be slightly faster. It was the camera, however, that we didn't expect at all - Samsung has one of the best cameras on the market and Oppo was able to answer. With a Sony sensor no less, something even Sony has issues with.

The Galaxy S5's multimedia package is richer out of the box, but this is the era of the app store and people often prefer third-party apps, which are the first things to install on a newly bought phone. That is to say Find 7a's few lapses in the app package may as well go unnoticed.

With all this in mind, we don't think we can draw a dividing line between the two super gadgets. One thing is for sure though, the relative unfamiliarity of the Oppo brand shouldn't deter you from picking it over an established player like Samsung.

We'll still point out each phone's strengths, one of those differences might tip the fine balance of the scales in favor of one or the other.

The Samsung Galaxy S5 is more compact and has an amazing screen - perfect contrast and the most accurate colors on the market, it's more legible outside to boot. The S Health app is currently the best available and the IP67 rating lends itself to a sportier lifestyle. The fingerprint scanner has its uses too. The Galaxy S5 runs newer software and that might remain the case going forward, it has an edge in battery life too.

The Oppo Find 7a offers more screen real estate and surprisingly good image quality. The design feels fresh too or at least doesn't suffer from overexposure like Samsung's design language. The Black screen gestures up the coolness factor as well as usability. The phablet will appeal to advanced users with things like RAW support in the camera and a 10-band equalizer with low/high pass filters. The audio features are mostly for show, however, as stereo crosstalk will scare off any true audiophile.

The Galaxy S5 will certainly be the more popular phone, Samsung has already sold ten million. You're free to feel good or bad about it. The Oppo Find 7a is the off-Broadway option, but its audience will be just as pleased. And the ticket to that show costs way less.