Before jumping on the image quality topic, we have to cover something that has a direct effect on it - field of view (FoV). The Oppo Find 7a camera is wider than the Galaxy S5 camera by a fraction, but since it's a 4:3 shooter it capture more of the scene above and below what the Samsung manages.

However, it has only 4,160 pixels horizontally for that FoV, while the Galaxy S5 covers the same area in 5,312 pixels. This should give the Samsung flagship an edge in terms of fine detail. The two cameras differ on several fronts when it comes to image processing. The Samsung Galaxy S5 applies stronger noise reduction, so its photos have less noise but this comes at a price as we'll see in a minute. The camera balances noise reduction with more sharpness, which makes detail pop but pixel peepers will spot oversharpening halos.

The Oppo Find 7a is more restrained with both noise reduction and the sharpening afterwards, it also applies less saturation though the true colors are somewhere in between. 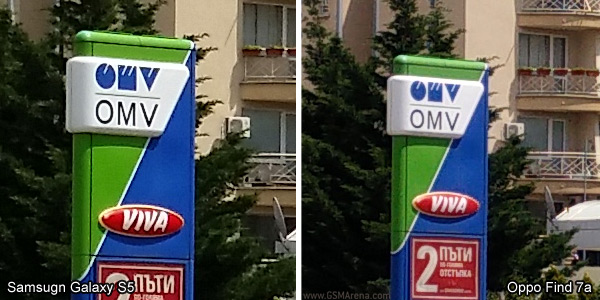 As we mentioned, the extra noise reduction comes at a cost - fine, complicated detail like foliage or other uniform textures gets smudged. Here the Oppo Find 7a renders the tree better than the Galaxy S5. The grey building in the background gives a good look at the general daylight white balance predisposition of both cameras too - the Galaxy S5 tends to create colder, greenish/bluish whites, while the Find 7a has a reddish tint. 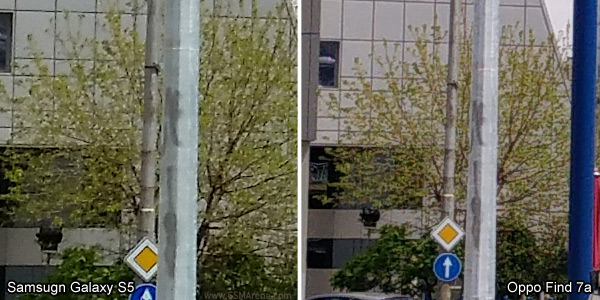 Software aside, both phones seem quite competitive in terms of what the hardware offers. The Galaxy S5 camera does seem to capture more detail in places, though the noise reduction often negates that advantage. The Oppo Find 7a, of course, has a trick up its sleeve - Ultra HD mode that creates 50MP photos. It achieves this by taking multiple shots and combining them into one single photo (you need to stand still for several second, shooting moving objects doesn't work).

It's a software trick, so we were wary of how it will perform. The end result is too soft for our taste, though even if you sharpen the end result, the 50MP photos of the Find 7a don't actually have more captured detail in them than a Galaxy S5 photo.

Upscaling the S5 photos makes the sharpening quite apparent as the end processing was carried on at 16MP, not 50MP like on the Find 7a. We wouldn't use Ultra HD for normal shots, but it can be useful if you want to zoom in on a particular object - the end result is more pleasant than upscaling a lower resolution photo (mostly due to the less obvious processing artifacts). 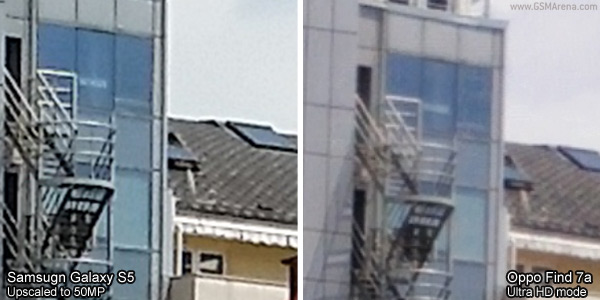 We tried out the HDR modes of both phones on a cloudy day. Both perform about the same on Normal mode, but with HDR mode on the Oppo Find 7a managed to bring out more detail in the shadows. It kept color better too, shooting against the sun in Normal mode lead to the colorful banners getting very desaturated. 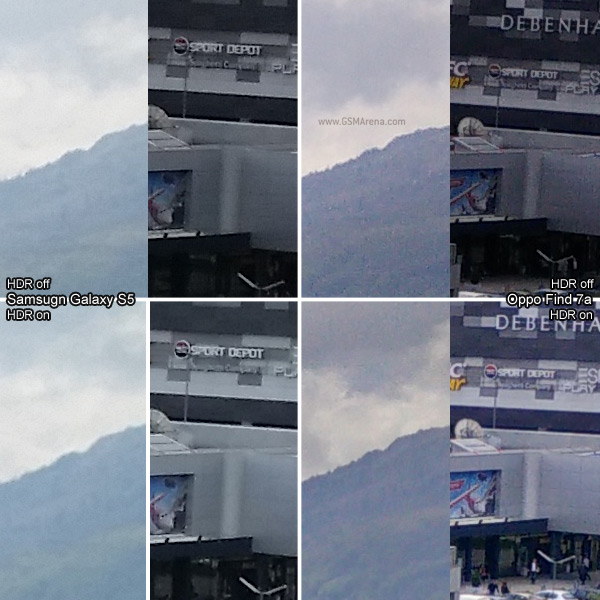 We also tried shooting an Ultra HD photo and downscaling it back to 13MP, thinking the multiple exposures can have an advantage in dynamic range. That isn't the case, if anything the dynamic range seemed to shrink. This did reduce the noise somewhat though, so we'll try this trick again in the low-light shootout. 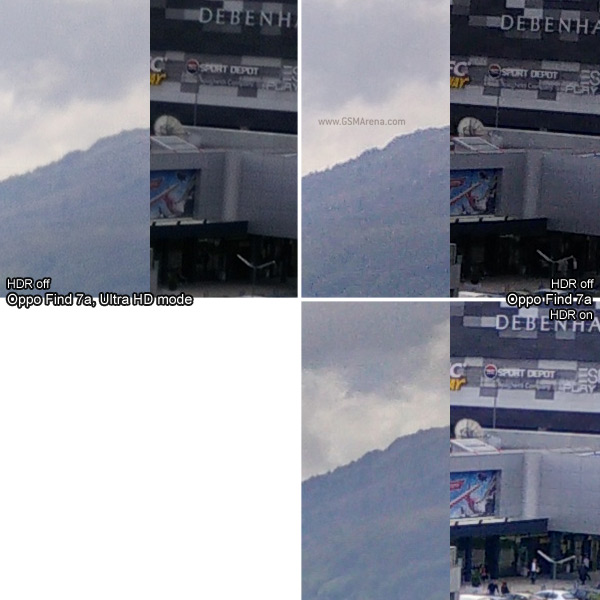 Here are the full resolution camera samples we used for the crops.

Samsung Galaxy S5 camera samples: HDR off and on

Oppo Find 7a camera samples: HDR off and on, 50MP

While enjoying a spell of good weather, we snapped a panorama with each phone too. The Galaxy S5 produces higher resolution panoramas and would go wider than the Find 7a, which bailed after around 180°.

Samsung's processing is generally better and panoramas have more captured detail. It also handled stitching better, though color saturation is a bit too much. The Oppo Find 7a produced quite good images too, but its software has more issues with aligning and stitching the multiple images that make up the panorama.

Winner: Tie. In the end, differences aren't big enough to call a definitive winner, both flagships will produce photos you can be proud of.

The Samsung Galaxy S5 does capture some more fine detail and its photos are generally more pleasing. It outperformed its opponent in the panorama test too.

That said, the Oppo Find 7a allows you to capture more of the frame with its wide 4:3 camera, plus it renders foliage better. The Ultra HD mode has its uses and the 7a did better in the HDR test too.

We went to a dark room and took photos with flash off and on. We took four photos with each phone in each scenario and picked the best and the worst.

The ISOCELL sensor of the Galaxy S5 plus its better low light image processing overall has led to more detail being captured in the dark. White balance is fairly accurate, tending slightly towards warmer colors, while the Find 7a ended up with a cooler white balance.

Neither phone handles handshake very well though, no surprise at these shutter speeds and with the lack of an optical image stabilization system. With the flash on, the Samsung Galaxy S5 dropped the shutter speed in half and lowered the ISO down to 250. The Oppo Find 7a flash had a smaller, fill light effect and the camera shot at almost the same shutter speed (1/25s) and ISO (571).

The Galaxy S5 photos have less noise in them as can be expected and a pleasing amount of fine detail. The white balance remained warm, going towards yellow (the wall behind the mouse is white). The Find 7a photos are cooler, with more noise and less detail overall.

The Worst shots of both show signs of handshake, but aren't unusable. 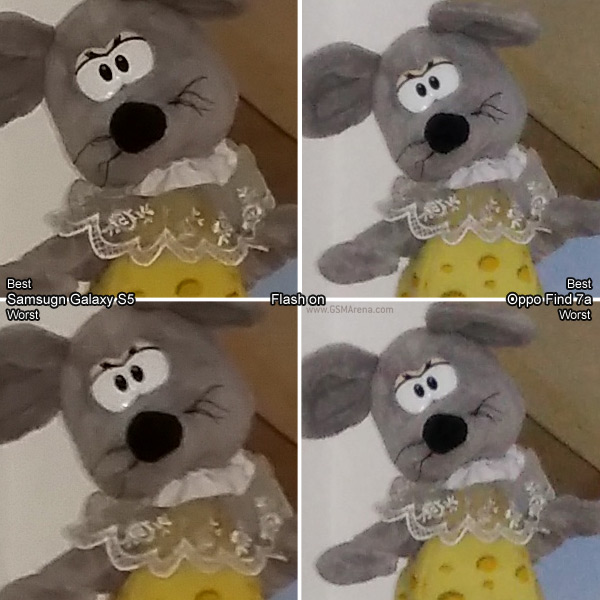 As we mentioned earlier, shooting in Ultra HD mode and downscaling the photo keeps the noise down. We did just that with the lights off. We also tried upscaling the Galaxy S5 photo to see what will happen.

The upscaled images show the Oppo Find 7a does manage to capture more detail this way. This is visible in the downscaled shot too, which offers a great amount of detail, even if there's still visible noise. By the way, the Find 7a also has a long exposure time mode that goes up to 32 seconds, which can also be used for super low-light shots. Best and worst photos with no flash: Samsung Galaxy S5 • Oppo Find 7a

Winner: Samsung Galaxy S5. It outperformed the Oppo both with and without flash, so this was a fairly clear victory.

The Ultra HD trick of the Oppo Find 7a is nice, but it requires that your subjects stay still for several seconds, which is not always possible. The resulting photo also begs for some further manual processing.