The Sony Xperia Z2's camera has the wider field of view (FoV) when using the entire frame, but the Superior auto mode crops photos to 16:9 aspect ratio, which levels things out with the Samsung Galaxy S5. The Galaxy has a 16:9 sensor so it doesn't have the option to shoot taller photos but, as we're about to see, you'd be better off using Superior auto with the Sony, too. 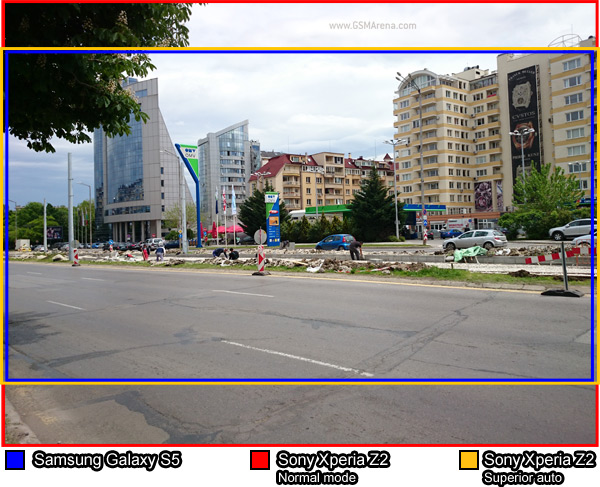 Superior Auto takes the 20.7MP frame from the Sony sensor, crops it to 16:9 and downscales the result to 8MP. Conveniently, that's just the resolution of a UHD TV so the photos will fit perfectly. The mode does some special post-processing along the way, which improves what are otherwise disappointing results at full resolution in Normal mode.

The Samsung Galaxy S5 is on the verge of resolving the small type, it's nearly readable. You can spot some oversharpening artifacts in that area, but it's not something you'll notice unless you view the image at 100%.

The 8MP Superior Auto shots from the Sony look noticeably sharper but the lower resolution does cause some loss in detail. 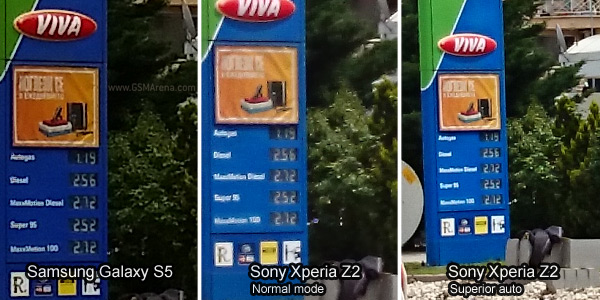 This crop also has the three primary colors visible - Red, Blue and Green. Neither phone hits the mark with the rendering - the contrast are a bit too much in the Galaxy S5 photo and a bit too little in the Xperia Z2 Normal mode photo. The Superior auto mode seems to be closest to the truth. 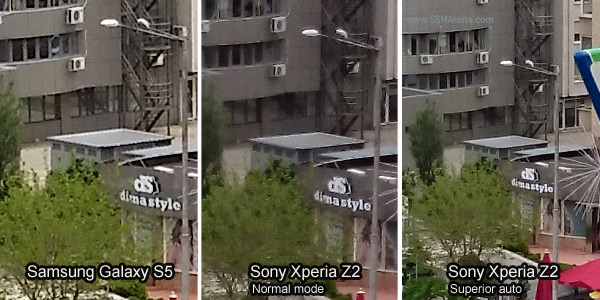 The Galaxy S5 has its headaches too, it struggles with foliage. The grey roof in the center of the image also shows a clear oversharpening halo. The Sony Xperia Z2 in Superior auto renders the tree better than Normal mode though not much better than the Samsung. The fire escape in the background also improves with Superior Auto though again not enough to beat the Galaxy S5.

Here go the full res samples, if you feel like performing your own comparisons.

We moved to a dark room to try the low-light performance of both phones. This is the Xperia Z2's time to shine - it has a wider f/2.0 aperture and a larger 1/2.3" sensor, compared to Galaxy S5's f/2.2 lens and 1/2.5" sensor. The super sampling performed by Superior auto will also be of great help.

The first test is with the flash off. The Samsung Galaxy S5 photo was taken at 1/20s shutter speed and it has clear traces of camera shake. The Sony Xperia Z2 shot at 1/32s and the Superior auto mode in particular looks very usable. There's some noise and softness, but it looks very good for a low-light shot. 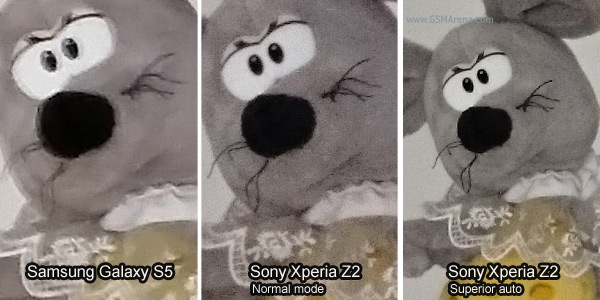 Next, we enabled the LED flashes (which only work at relatively short distances) and took more photos. The Galaxy S5 dropped the shutter speed 1/33s and eliminated the handshake, capturing a good deal of detail. The white balance is noticeably skewed towards red. 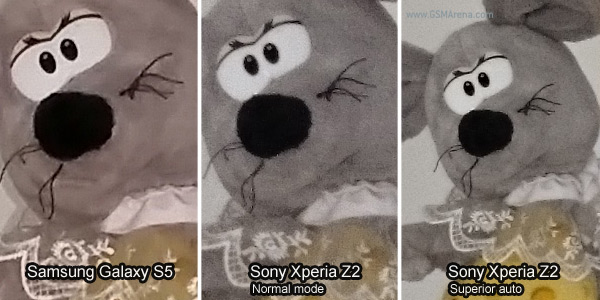 Both phones also feature the recently trendy shallow depth of field effect. Both have only one camera so they take two photos and achieve the effect through software trickery.

The primary difference here seems to be the effect's intensity. Samsung opted for slight blur, while Sony smudges the background to a near uniform blob of color. This makes the effect look cooler at first but also serves to highlight the areas where the algorithm got it wrong. Samsung's algorithm messes up some areas too, but it's less noticeable since the difference between "in focus" and "blurred" isn't as big.

Also, check out our Photo comparison tool that pits the two phones against each other.

Both phones offer some playful effects. The Xperia Z2 can overlay an imaginary 3D world over the photo with the AR effect (at a meager 1080p resolution) or use the GPS and compass to overlay info about your surroundings whit Info-eye. It has a dedicated Vine mode too.

The Samsung Galaxy S5 lets you create Virtual tours (though you might be better off just shooting video) and packs a bundle of effects in Shot & more (removing moving objects, cloning them and so on).

Winner: Samsung Galaxy S5. The daylight shots were clearly superior and it does relatively okay in the dark with the flash on.

The Sony Xperia Z2 underdelivers on its 20MP large-sensor promise, but 8MP Superior Auto shots look okay. The one area it won over the Samsung is low-light with flash off.