If you are not sure what to think and how to feel about the Samsung Galaxy S6, you came to the right place. We'll do it for you. Here's the deal. You're free to feel any way you like. Impressed. Upset. Confused? Sounds familiar. 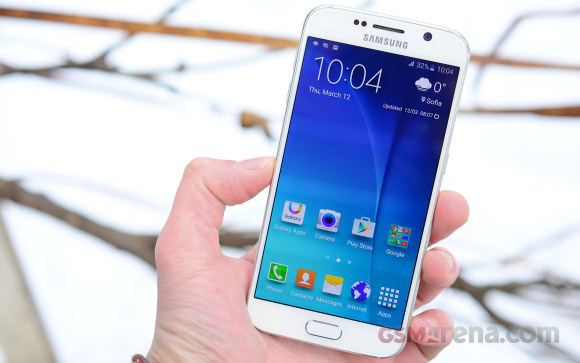 We've come to take it for granted that every new Galaxy S generation will add new features and beef up specs. The Galaxy S6 takes away. It's been encoded in Samsung's DNA to try and beat every spec of any rival. The Galaxy S6 omits the very features that, presumably, kept Samsung at the top.

Is this their way of saying we'll beat you even with one arm tied behind our back? We didn't become the market leader because the competition was stupid enough to not care about memory expansion and removable batteries.

Who knows, they may be this arrogant. Or maybe the Galaxy S6 is trying to say that the S-line can change and still be better than most.

But can it be the best Galaxy S smartphone yet without a memory card slot, removable battery and water-proofing? The best screen and chipset in business might as well help.

Last couple of seasons, the Galaxy S to get was the one powered by a Snapdragon chipset. The Galaxy S6 leaves nothing to chance... and goes all out with Exynos. The 14nm Octa 7 is quite a feat and the Qualcomm's Snapdragon 820 is months away at best.

Samsung has always insisted on the best available hardware for the Galaxy S-line and that's one thing that hopefully will never change. The QHD AMOLED screen and the Exynos 7420 chip are Samsung-made components, the 16MP sensor with optical image stabilization courtesy of Sony.

Wireless charging support right out of the box, LTE Cat.6, a much improved fingerprint scanner and heart-rate monitor round of a proper flagship package. The simplified and polished TouchWiz adds better theming support to the familiar solid multi-tasking features. The Galaxy S6 comes with 32, 64 or 128 GB of the super-fast UFC 2.0 storage and 3GB of new generation LPDDR4 RAM. You will be also getting 115GB of OneDrive storage out of the box, which is great. Other Microsoft goodies are OneNote and Skype.

The bad? Well, no memory expansion and no access to the battery are big no's in our book and that won't change overnight. The lack of water-proofing isn't a deal-breaker, but even if it was, Samsung would kindly point you to the Galaxy S6 Active, which is just around the corner.

Very few real competitors offer a user-replaceable battery. Expandable memory is a different story - probably the biggest risk the Galaxy S6 is undertaking. If that steers more customers to the Note 4 though we don't think Samsung will mind.

The Snapdragon 805-powered Galaxy Note 4 also offers a Quad HD Super AMOLED screen, just bigger. It has the same camera sensor but the old-gen fingerprint scanner. The S-Pen and its dedicated apps are hard to say no to at about €150 less than the expected launch price of the Galaxy S6.

That said, the Galaxy S6 Edge is probably the toughest in-house competitor - if you're on an unlimited budget. That curved display makes an already premium phone absolutely unique and we understand those who think it should've been the one and only flagship. Yep, we've seen it and if it doesn't help you get over the missing card slot we don't know what will. It's an extra €150 for the double-edged screen, take it or leave it.

The HTC One M9 is the only flagship by a major manufacturer that debuted right along the Galaxy S6 - and may even beat it to market. It's stuck at a 1080p screen - but the probable upside is faster performance by the S810 chip. It has the familiar all-metal unibody, graced with BoomSound speakers and the camera sounds quite promising on paper. It omits a fingerprint scanner but has expandable memory and costs about the same as the Galaxy S6, which we don't think is doing the M9 any favors.

The LG G Flex2 with its curved P-OLED 1080p display, self-healing rear cover and Snapdragon 810 chip is worth checking out, especially considering it costs less than the Galaxy S6. The unique design is complemented by a capable OIS 13MP camera and although the curved body rules out a removable battery, a microSD card slot is available.

Finally, Apple. The most likely rival to push Samsung out of their comfort zone. The one to prove a point to. The one that does not compete for specs and benchmarks - and therefore the one that's hardest to beat. The Galaxy S6 is a couple of generations ahead in the numbers game but clearly learning from Apple in terms of design. So much so that if it wasn't for the Edge, Samsung would've had trouble responding to allegations of copying this time around.

Anyway, another pair of flagships will make things even more interesting. The Sony Xperia Z4 and the LG G4 will eventually challenge the Samsung Galaxy S6 for the Android top spot. Sounds just like last season. But it's different. It almost looks like Samsung is breaking their own rules just to make it more exciting. Wrong. They darn sure want to win again.