The Samsung Galaxy S6's retail package only contains the essential accessories. The solid, white box packs a microUSB cable, a fast-charging-capable A/C adapter and the company's latest set of headphones. All these are white to match the color of the handset itself.

There is no wireless charging plate - these are a rare catch in phone bundles (the Lumia 930 is the only one that comes to mind). Fast chargers are a bit more common but by no means widespread. The Galaxy S6 has one in the box so you don't have to spend extra.

The Samsung Galaxy S6 has a brand new design but the same screen size as its predecessor. Keeping the same level of comfort of handling and portability aside, the 5.1" diagonal allowed them to get the highest ppi on the market. The lack of enhanced protection and the new materials employed helped a much thinner profile than the predecessor. The Galaxy S6 is just 6.8mm thin against the 8.1mm of the Galaxy S5. It's hardly a coincidence either that it's a fraction of a millimeter slimmer than the iPhone 6.

Size comparison: Samsung Galaxy S6 next to the iPhone 6

The overall size of the Galaxy S6 is very close to the previous generation: 143.4 x 70.5 x 6.8mm, and 8g lighter at 138g. Not much bigger than the iPhone either considering the difference in screen size.

Samsung went way beyond its comfort zone to design an entirely new Galaxy species from scratch. And this time around, saving some money wasn't on the agenda. We don't know if that's the change everyone was hoping for but the S6 is the sexiest flagship yet.

The Samsung Galaxy S6 body consists of a brushed metal frame holding together a pair of glass panels. This doesn't even begin to tell the story. You can read anyone's impressions but you will only know what it's all about if you get to unbox one. 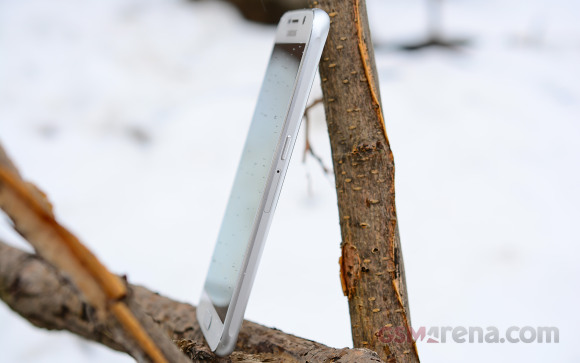 Plastic is durable while glass cracks and metal dents. There's more value in a removable battery than premium design. A memory card slot... All that. The Galaxy S6 will not try and deny the facts. We call them facts - to the Galaxy S6 they're the predecessors' excuses for not quite looking their best.

The sides of the Galaxy S6

Samsung introduces glass to the Galaxy S series for the first time - two sheets of Corning Gorilla Glass 4, front and rear. It's not a combination Samsung invented but we are glad they ditched the plastic and kept the trademark shape and look.

Arguably it's the easiest way to achieve the upmarket feel while keeping weight down. Adding to the high-quality appeal, the body is a mere 6.8mm for a proper balance between handling, appearance and battery capacity.

Such a sea-change came at a cost and indeed the Galaxy S6 is losing the removable battery for good. What's odd is the lack of water and dust protection, which was a key selling feature for the previous generation Galaxy S5.

There is the camera hump too, which was just inevitable - Samsung added so much tech and yet trimmed the body down. The new sensor, lens and optical image stabilization more than make up for it.

Handling the Galaxy S6 is nothing short of pleasure and it isn't compromised by the dual-glass design. The metal frame and its flattened sides improve the grip and the glass is not terribly slippery either - it gets smudged though. Sure, the Galaxy S6 doesn't offer the most secure grip, but it does get the best out of the combination of materials.

Above the gorgeous 5.1" Super AMOLED display we find the earpiece, a couple of sensors and the 5MP F/1.9 selfie cam.

The ever-present home key remains a key point in the interaction with the smartphone and doubles as a fingerprint scanner. At its sides are the capacitive Task Switcher and Back buttons.

The left side of the Galaxy S6 has the two metal volume keys, while on the right there are the power/lock key and the pop-out SIM tray.

The sides of the Galaxy S6

The bottom on the Galaxy S6 is pretty crowded featuring the USB port, a 3.5mm headphone jack, microphone and speaker. The top is cleaner, with only an IR blaster and a pinhole for a secondary microphone.

The back of the phone is where the slightly protruding 16MP f/1.9 main camera/4K camcorder resides. It features optical image stabilization, so the expectations for its low light performance are high. Next to the lens you'll notice the LED flash and the heartrate sensor.

The 16MP camera lens at the back

The rear panel is not removable and doesn't allow access to the 2,550 mAh battery. There is no microSD slot either.