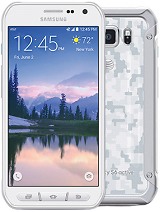 RGN, 15 Feb 2022Still using this phone in 2022, but not as daily phone. There are so much I love from this pho... moreI still use this phone and I like it sooo much

RGN, 15 Feb 2022Still using this phone in 2022, but not as daily phone. There are so much I love from this pho... moreI still use this phone and I like it sooo much

Still using this phone in 2022, but not as daily phone. There are so much I love from this phone, from the design, buttons (I somehow like non-touch navigation buttons, except if it's already on-screen navigation. I also like how firm it is), etc. The only thing disappointing for me is that the Galaxy S6 Active can't unlock bootloader so that I can't install custom roms to enjoy newer Android. Stucks at Android 7, while my mom's S4 could install LineageOS 18.1 (Android 11) lmao. But it's still a good phone tbh.

I so hate that I lost (6/2021) my phone S6 active. Loved it. Purchased 12/2015, dropped >100x never any damage to it - fully functional always. In the past year it started dropping calls and last 3 months battery wouldn't hold a charge. If I had known that the battery could be changed (techs at store told me it couldn't be) I would've kept it forever. Samsung needs to bring back the active model to their line. I just purchased the A42 - lots more features. Still miss my S6 - it was a full 10 of 10 rating!!

This phone has been dropped in buckets of tractor oil, coolant, and water troughs. been run over by tractors and combines, been thrown from my pocket off my horse. The past 2 years it hasn't had a case on it and it barely has a scratch on it, despite all the times it has fallen out of my truck and skid across concrete and tile. I've had it almost 6 years and it has just now started having problems charging. I'll miss it and hope my next phone is even close to how hardy this one was. Why'd they stop making these

I've had my s6 Active for 5 years and it's just begun to lose battery charge after only a few hours. It's been the best phone I've ever owned. It's been dropped too many times to count and I've been swimming and canoeing with it on several occasions. It's time to get a new galaxy, but I don't know what's the comparative and the sales people are clueless about the s6 Active. They think it's just another phone, but until you've owned one, you have no idea. Anyone else replaced theirs with something similar? - please let me know.

One if the best android phone I've ever used and I still love it. This phone is durable and also good looking too

AT&T has let this phone update to Android 7.0 before they cut support, I think this should be updated?

AnonD-788419, 18 Sep 2018Whatever happened to the Loudspeaker test? It is one of the most crucial aspects of performanc... morePhonearena has done a loudspeaker test and has around 83dB

I got one of these recently, it looks great but needs a new battery. Wish that wasn't such a hard fix

Wow.
This thin is hard to fix.
Just had to do a battery replacement

JM, 13 Sep 2019No problems with this Samsung Galaxy S6 Active phone since I purchased it a few years back! HO... morewhy???

No problems with this Samsung Galaxy S6 Active phone since I purchased it a few years back! HOWEVER~ The phone locked up at the end of August. I sent it back to Samsung for repairs and today, I get an email: repairs exceeded $668 US Dollars to fix it. Something about the mother board and the crystal face. It froze up on the black and white screen. I couldn't get it to reboot. It had a color screen show up but would not let me toggle through the menu! For that kind of money, it's time for a new one! I think it's CrAzY what they want to repair it!

This phone was lost on a kayaking trip and spent 13 days at the bottom of a river, was eventually recovered, and found to be in complete working order.

I've had this phone since 2015. True that without a case it's pretty rugged, but with my current SUPCASE and the Supershieldz Tempered Glass Screen Protector.
Well, let's just say if someone asked me to throw my phone across the room(which I've done BTW), I'm not worried in the least and it's simply a monster.

Unfortunately now, it's showing its age. The hardware can't keep up well with the latest software demands and the battery is starting to lose its charge suddenly. After 4 years of use I suppose I shouldn't complain all that much.

Wish Samsung would continue to make the 'Active' variant.

Ruggedman, 01 Feb 2019I purchased an s6 active in 2015. I have taken videos under water while snorkeling. I have dro... moreRun over by a forklift??? You expect "smart" phone users to believe that

I purchased an s6 active in 2015. I have taken videos under water while snorkeling. I have dropped it while stand, on several occasions,, and it works perfectly. I even ran my active over with a forklift, and the phone still worked as the screen slowly blacked out. After having it repaired I am still satisfied with its endurance and performance. Why does Smsung not continue with same durability on the newer active phones?