A couple of months after the previous one, T-Mobile has started rolling out a new security update to Samsung Galaxy S6 and Galaxy S6 edge units on its network.

Arriving as firmware version G920TUVS5EQA2 and G925TUVS5EQA2, respectively, and weighing in at around 30MB, the update brings along Android fixes for the months of December and January. 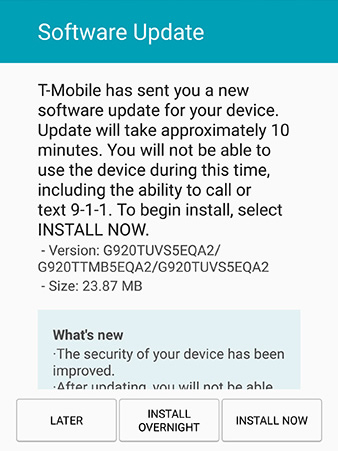 There's no information on what other changes (if any) are included in the update.

Better stay away from this one. Its killing the battery. Google play services usage is 50-60% after the update

Interesting since my S7 Edge is still sitting on Nov'16 update

I had the same one too. I guess its a roll-up of Nov-Jan security patches and other stuff. The good news is that after an initial full discharge - charge cycle, the battery life so far seems much improved and back to pre Oct security patch.