Newly leaked schematics of the Samsung Galaxy S6 have appeared and are telling a bit of a different story from the initial ones we stumbled upon not too long ago. Apparently, the Galaxy S6 will have a protruding camera module, which isn't ideal as this might make it wobble when placed on a flat surface. 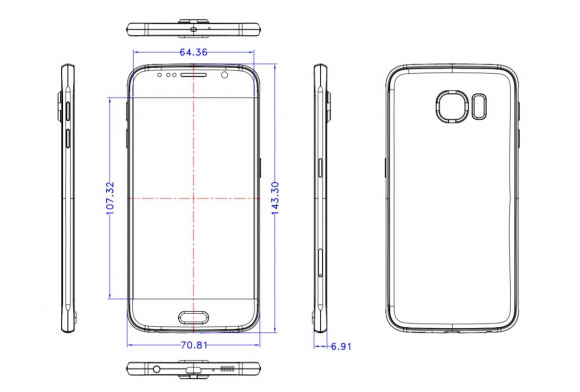 Nevertheless, the phone will measure 6.91mm, and not 7.2mm, as previously believed. The height and width of the phone are on par with the previous leak, 143mm x 70.8mm, suggesting that this might simply be coming from a later stage of the production. Samsung made the Galaxy S6 this thin thanks to the use of a metal frame.

Photos of it leaked yesterday and show the interesting design of the sides. A photo showing the top of the phone also hints at an IR blaster. However, to make the phone this thin means that the battery capacity might be less than the Galaxy S5's.

In terms of specs, we expect the phone to pack a 5" Super AMOLED display of QHD resolution, Exynos 7420 chipset with an octa-core CPU and 3GB of RAM. The 20MP camera is coupled with a 5MP front-facing one and the phone will feature a non-swipe fingerprint sensor on the home button.

The Galaxy S6 prices are hinted to start at 749€ SIM-free for the 32GB model and go up by 100€ for the 64GB and 128GB tiers. Expect more information at the Samsung Galaxy Unpacked event in Barcelona on March 1.

I'm going to go ahead and guess that you've never had a Samsung device that has a fingerprint scanner, simply based on the fact that you said you had to disable it. It doesn't come pre-enabled. You have to go through the set up process after the...

Well I'm sure we are all shocked by a protruding camera