Samsung and HTC are inseparably entangled with Android and the platform proved a major driving force for the rise in fortunes for the two companies. A lot of that was on the back of flagships - despite being the priciest gadgets in the lineup, Galaxy S and One flagships have drawn massive amounts of interest that subsequently translated into sales. 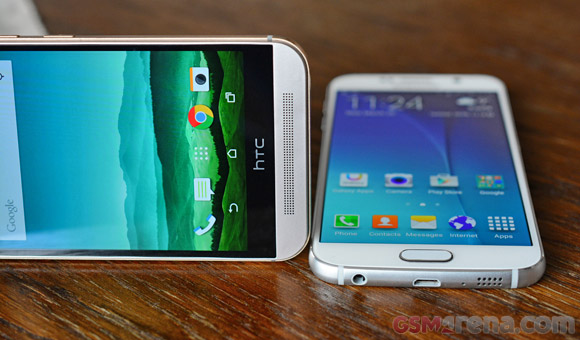 A flagship is also a role model for lower-end devices and its popularity boosts their profile too. That proved a bit of a problem for Samsung as even cheapo Galaxys looked a lot like the flagship, which undermined the design perceived value. This year the company rebuilt the Galaxy S6 from scratch and the results received great acclaim.

This kind of problem wasn't an issue for HTC as the One family for the last two years and (aside from mini and Max versions) no other HTC handset matched the One's striking appearance. For one reason or another the company was struggling to maintain profitability, at least until things started turning around with the One (M8).

So, has HTC extended its positive momentum with the One M9? On its own it's a good phone though it's not a massive improvement over last year's model. Samsung was in the exact same boat with the Galaxy S5 in 2014 and that put an end to its streak of record-breaking sales.

Previously, exacting HTC and especially Apple users dismissed the Galaxy S as plastic and derivative looking. They had a point too, Samsung's strength was always feature domination not design. Even if it doesn't have an all-metal unibody like the current iPhone 6 and One M9, there's no denying the Galaxy S6 is eye-catching.

The attention to design didn't detract from features, if anything Samsung is further ahead of the competition this year. Various Samsung divisions came together to assemble a phone with the best screen, chipset, memory and (with help from Sony) camera.

Sure, Sony and LG are yet to have their say, Apple too later this year. None of that will help HTC though.

HTC stuck with the same design for a third year, the major change this time is the dual-tone build. It does look good - we spent some time with the Silver/Gold One M9 and it reminds us of a luxury watch a bit. The Gunmetal Grey looks too much like its predecessor and we're not completely sold on the Gold/Pink version.

The other major change was the camera department. We never had much love for the UltraPixel sensor, but it does make a good selfie camera. The main camera, however, was a disappointment. Good for still photos at day, okay for videos (with pending issues) and pretty lacking in the dark.

Credit where credit is due, the audio is perfect with headphones on and great with them off. The chipset is new too. We found it a solid performer, overheating gets annoying in long gaming sessions, but it also means the battery isn't used efficiently.

If you want to upgrade from your 2013 HTC One and want to stay with HTC (Galaxy S6's looks failing to impress you), the One M9 has plenty to offer. But it's difficult to see what users who didn't buy the One or the One (M8) will find appealing about the One M9, enough to make them switch.

The same argument doesn't hold for the Galaxy S6. The Galaxy S4 and S5 had impressive features, the main complaint with them was looks and build. And the S6 resolves that handily.