The Samsung Galaxy S6 records the 2160p@30fps videos at 48Mbps total bitrate with high-quality stereo audio (256Kbps bitrate and 48kHz sampling rate). This means 1 minute of footage is a whopping 300MB. Also, the phone limits you to 5 minute clips.

The HTC One M9 goes a bit longer, 6 minutes, but its total bitrate is lower, 42Mbps. That's plenty, the real issue is the audio that's captured at 96Kbps, which isn't enough for good stereo. Also, the One M9 field of view (FoV) is noticeably narrower, which will give it an advantage for fine detail, but it fits less inside the frame.

The Samsung Galaxy S6 videos are impressively sharp. They have plenty of fine detail, some things are not as clearly defined as in the HTC One M9 videos (look at the road signs for instance), but that's a side effect of that particular FoV. Samsung has enabled some sharpening in the videos, unlike the still camera.

The HTC One M9 makes a hash of things. There's a lot of purple tint in the frame and it's both under- and overexposed. We already established that the sensor in the Galaxy S6 has a wider dynamic range, but that's not nearly enough to justify what we're seeing.

Have a listen to the videos too, in Galaxy S6 videos you can clearly hear the car's tires roll by while One M9 videos have a flatter, noisier audio.

Winner: Samsung Galaxy S6. The wider FoV has put it at a disadvantage when it comes to finer detail, but it's a fair tradeoff for fitting more in the scene. The better color rendering and dynamic range help a lot too.

The sub-par audio capture of the HTC One M9 was bad enough, but the company really needs to resolve the issue with 1080p@30fps videos.

"Low light photos" was the standby excuse for keeping the UltarPixel camera on the previous HTC One flagships. That's gone now and the difference in daylight shots is great, but what happened to shooting in the dark? Let's just say this will be a rather short chapter.

We snapped the same photos we used for our recent camera shootout. The first sample is taken at dust, the next one after a few minutes when it got darker and the last one was at night.

The Galaxy S6 leveraged its optical image stabilization and dropped the shutter speed quite low without adverse effects. The One M9 also lowered its shutter speed, but without OIS many of the photos were blurred by camera shake.

Even though we picked out the best samples, the thing is the HTC dialed up the ISO very quickly and any semblance of detail was lost in the noise. Even the first photo (taken at dust) was at ISO 400 and was quite soft and noisy. Things only went downhill from there.

The Samsung Galaxy S6 also has a wider aperture, which combined with the OIS and slow shutter speeds allowed it to keep the ISO relatively low and turned in usable shots. 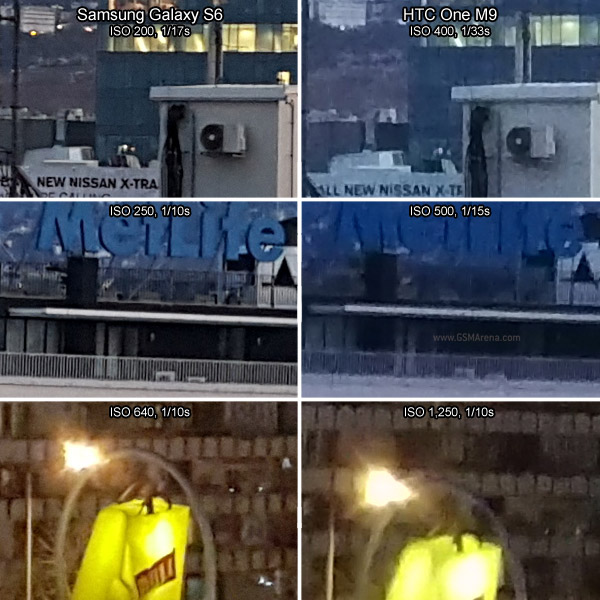 Winner: Samsung Galaxy S6. This was a swift victory, the Galaxy S6 is one of the best low-light shooters around.

The HTC One M9 camera proved to be lesser in this respect.

The quality of videos shot at dark is an extension of the quality demonstrated by the still camera. This doesn't bode very well for the HTC. Indeed, the videos from the One M9 proved very noisy and low on detail despite the FoV advantage.

Here's a crop to show off the magnitude of difference in performance for both cameras. We only tested the 2160p videos because of One M9's issues with 1080p@30fps. The dynamic range comes up once again, the HTC just doesn't do very well with bright street lights in a dark street. Even when bright windows are less prominent the result isn't much better.

The Samsung Galaxy S6 preserves more detail both in the well-lit and dark areas and unsurprisingly its videos are much more detailed overall. 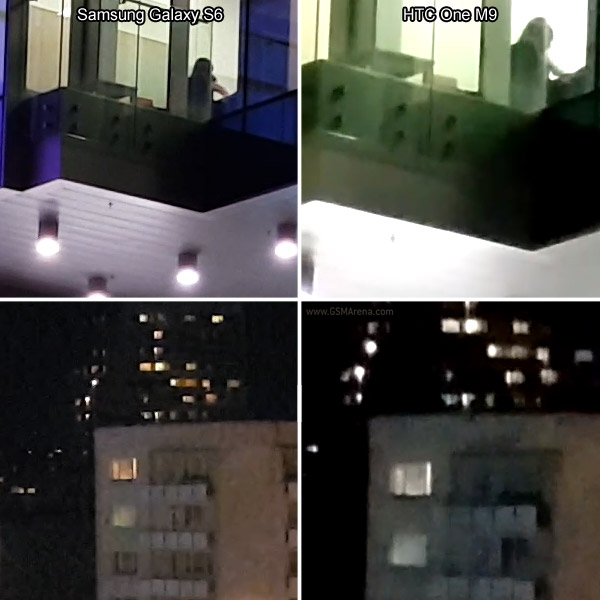 Winner: Samsung Galaxy S6. You can refer to our recent camera shootout to see the S6 against stronger opponents, this was an easy win.

The HTC One M9 has serious issues with low-light performance, both for stills and for videos.

The HTC One M9 has a dual-LED, dual-tone flash, which should give it an advantage over the Galaxy S6. Indeed, the flash is stronger and it fills the frame more evenly. For every shot we took, the One M9 adjusted the strength of the flash until it found just the right amount of power and it achieved accurate white balance.

The noise reduction takes away a lot of fine detail though. The Galaxy S6 is the opposite - plenty of fine detail, but noticeable light falloff (it's plainly visible in the thumbnail) and we had some issues with the white balance. Even shooting with a white wall as the background, the S6 couldn't get it quite right.

Winner: HTC One M9. The photos are good enough for sharing on Facebook (which is going to downscale them anyway). You can get more detail from the Galaxy S6 if you run color correction in an image editor, but there's nothing you can easily do to fix the vignetting caused by the flash falloff.