Selfies are the most popular type of photo these days and both companies acknowledge that with capable front-facing cameras. Plus, HTC One M9's camera used to be the primary camera on two flagships and 4MP/1080p is the type of camera used on some mid-rangers.

Both cameras are great at their job. The Galaxy S6 camera dialed up the exposure so some detail was lost in the white clouds (we'll turn to HDR in a moment). The white balance is slightly warm for the Samsung and slightly cold for the One M9.

The HTC selfie is a bit dark in the shadows, but that provides better contrast, while the Galaxy selfie looks a bit washed out. The 16:9 aspect ratio of the One M9 photo is also more convenient for the modern widescreen world. 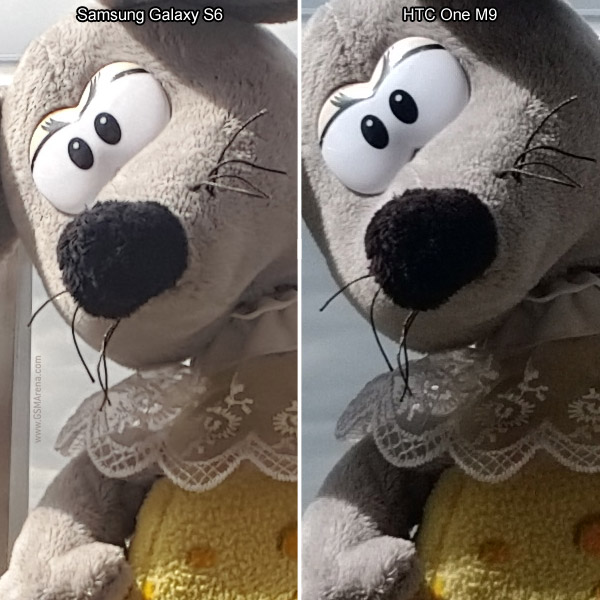 Both selfie cameras have HDR modes for when the sun is at your back. The Galaxy S6 camera, like other Samsungs, has a very light touch. If you look carefully you'll see it fixed the overexposed clouds though. The HTC One M9 camera on the other hand dialed the effect a bit too high - it creates a dramatic, but unnatural looking sky.

With Samsung Galaxy S6's wide aperture you can get close to the subject and let the lens naturally blur the background.

Winner: HTC One M9. The better contrast makes the selfies look better. The HDR effect is too strong for us, but some like it that way.

The Samsung Galaxy S6 selfie camera produces sharp photos, but they are an old-school 4:3 and could use a boost in contrast.

While HTC dropped the secondary camera on the back the One M9 still has a mode to create a bokeh around your subject. There are no settings here though, you just shoot an object at 60cm/2ft and let the camera do its job.

The Samsung Galaxy S6 has a similar mode, but it lets you set the focus distance nearby, far away or get everything in focus. This adjustment can be done after the photo is taken.

Neither camera can replace the real thing, but we found Samsung's processing to be more accurate. The HTC One M9 blurred some nearby objects and there's an un-blurred gap on the boundary between close and far away objects.

Samsung Galaxy S6 selective focus: near • far • all in focus

Winner: Samsung Galaxy S6. The option to blur the nearby object gives you more creative freedom and what's more, the Galaxy S6 processing is more accurate.

The Samsung Galaxy S6 starts the Panorama mode with a clear advantage. It creates images that are around 3,200px tall, while the HTC One M9's panoramas are under 2,000px tall.

The difference in fine detail is quite pronounced in favor of the Galaxy S6. The better Samsung image processing from the still camera is visible here too. The HTC One M9 had some minor stitching issues, but seem to have more problems with moving objects.

Winner: Samsung Galaxy S6. The higher resolution and better processing allowed it to capture more detail. This is a situation where the 20MP camera should have been an advantage for the One M9, but that's not the case here.