The Samsung Galaxy S7 comes in a newly-designed retail box, which slips out of a sleeve with the phone's name embossed on it in bright colors. The actual box is covered by a flap - no more waiting for gravity to help lift the tight fitting lid of the older packages.

The phone sits on top and underneath there's a separately packed headset (same as the one bundled with the S6), a fast charger, a USB-to-microUSB cable, and a USB-to-microUSB adapter, with USB OTG support. Using that you can turn the S7 into a power bank for charging other devices - the most obvious use case would be to top up wearables on the go, but also to salvage a friend's phone should the circumstances call for it.

The S7 is also heavier, at 152g compared to the Galaxy S6's 138g. The difference is subtle, perhaps the only way to appreciate it is if you deliberately compare the two side by side.

Five generations of Samsung Galaxy S models were made of plastic, and as the years passed that became an issue with industry pundits and users alike, insisting that the build quality and overall feel of the devices didn't quite live up to their price point and spec sheet.

Galaxy S7 next to the Galaxy S6

In came the Galaxy S6/S6 edge around this time last year, introducing a glass/aluminum body, a design later featured on the Galaxy S6 edge+ and further refined on Galaxy Note5. It is precisely the Note5 that the S7 takes after, with a few additional touches.

One of the most notable changes is on the front, where the Gorilla Glass 4 panel has been shaped in such a way that it slopes differently towards the sides than it does top and bottom. It's the most minute of differences and you may need someone to point it out for you if you're not the type to examine your gadgets up-close, but once you're aware of it, you'll appreciate the attention to detail.

One point the more picky among us insist on making is that the S6's frame would stick out just a smidgen above the glass panels here and there, both front and back, and particularly in the corners. While it wasn't all that big of a deal, it would come at odds with the otherwise premium aspirations of the phone. Nothing of the sort with the S7. 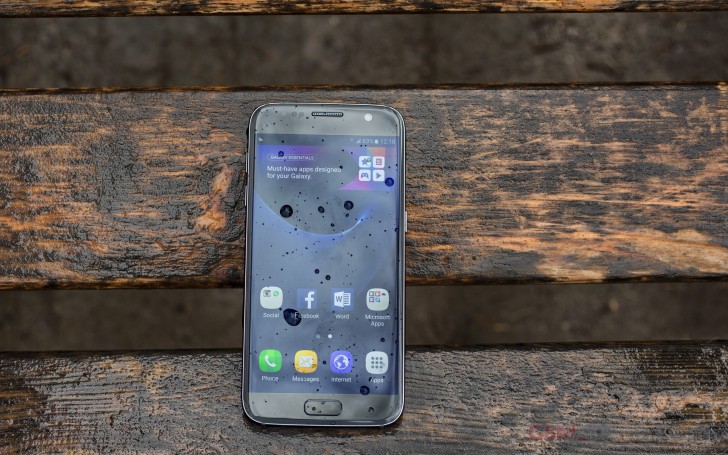 The return of IP68 certification is another welcome change compared to the S6. The Galaxy S7 can be immersed in up to 1.5m for up to 30 minutes, making water-related accidents one less thing to worry about. That's the 8 in IP68, but no one seems to be focusing on the 6, which means the S7 is also dust tight - great if you bake bread or make pizza for a living, for instance.

Always On display in standby • Full on AMOLED

On the forehead, the Galaxy S7 has a nearly identical arrangement of the selfie camera, earpiece and proximity/ambient light sensors as the S6. And, like the S6, the S7 has an LED notification light to the left of the earpiece - a feature sorely missing on the A-series, for example.

The physical Home button, a staple of Samsung smartphone design, has been slightly modified too. Where on the S6 it had half-circles left and right, on the S7 it can best be described as a rounded rectangle - there are slight straight sections on either side, for all three people who care.

It still houses a fingerprint sensor, of the tap variety - you don't need to swipe, and do so with a particular speed like earlier Samsung designs. Instead, you press the Home button to wake up the phone and keep your finger on the button while it reads your print and unlocks.

It's not always on, so you can't skip the waking up part, which is something to get used to if you're coming from most any of the Chinese brands or one of the latest Nexuses. However, it's the way Samsung's chosen to implement the feature and it's also the norm in the iPhone world, so obviously half the population are already used to having it this way.

Around the back, the similarities with the Note5 are more apparent. The curved sides come straight from the latest high-end phablet and do wonders in masking the increased thickness.

Curved rear has been borrowed from the Note5

Samsung likes to make a point in promo materials about how the camera module now only sticks out by 0.46mm from the back, but the thing is that's perhaps almost entirely because of the extra 1.1mm added to the waistline. To reiterate though, we're perfectly fine with the 7.9mm of overall thickness, and also enjoy the smaller camera bump, it's just that the latter is more of a consequence and not an achievement in itself. 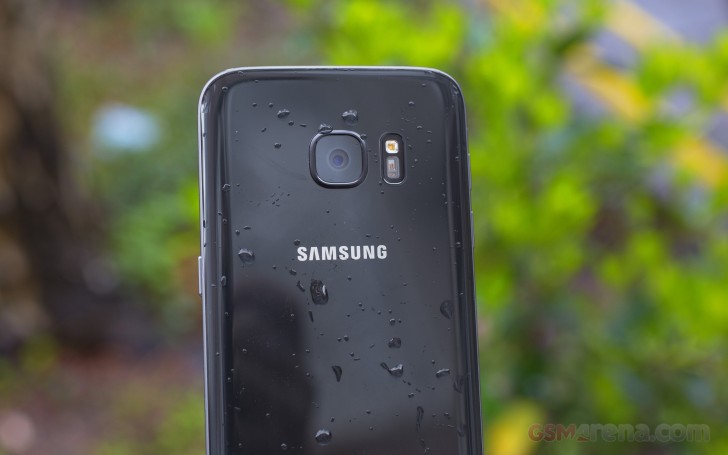 The arrangement on the back is also nothing new - the camera is centrally placed, the flash, and sensor array on its right. For the detail freaks, the insert underneath the lens front element is now black, regardless of the phone body paint - same as on the Note5, and unlike the entire S6 family, where it would match the body color instead.

The top of the Galaxy S7 now holds the SIM card tray, which also doubles as a microSD card tray - hooray! Our single-SIM review unit can hold one nano SIM and a microSD, while dual-SIM models have a hybrid slot - it can either take two nano SIMs or a nano SIM and a microSD. There's also a secondary mic on top, but the IR emitter is gone, likely for good.

The bottom holds the microUSB 2.0 port (no Type-C port for better or for worse), the primary mic, a single speaker and a 3.5mm jack. None of these are aligned with any of the other, which may bother a particular demographic, but in such crammed spaces you take what you can get.

The right side of the phone is home to the power button, while on the left you get two discrete volume buttons. The placement is typical Samsung, the execution is in line with the company's premium lineup. The frame itself has the exact same vibe as on the Note5, only scaled down obviously.

In the hand, the Galaxy S7 feels reassuringly solid, and you probably won't mind the added heft, compared to the previous model. It's also not all that slippery you'd expect from a dual-glass body - but fingerprints are an issue you'll be dealing with daily.

Galaxy S7 in the hand