Third generation in a row, the Samsung Galaxy S flagship comes with a 5.1-inch display and for the second time it has QHD (or 1,440 x 2,560 pixels) resolution. The subpixels are arranged in the familiar Diamond Pentile fashion, meaning the green subpixels are twice as many as any other single color.

We're happy to see that Samsung is offering higher maximum screen brightness on the S7 when compared to the S6. The overdrive mode, which kicks in under bright sunlight if you have Auto brightness ON, goes a bit lower than what we saw on the S6.

The minimum display brightness is 2.1nits, which is perfectly suitable for late-night reading in a dark room.

Color accuracy of the screen is top notch as long as you opt for the Basic display mode. The other available modes make colors pop but they are nowhere near as color accurate as Basic (Average DeltaE 2000 of 1.7 and Max DeltaE of 2.3). For comparison, the Avg DeltaE in Adaptive mode is 7.1.

The Galaxy S7 posted a remarkable result in our sunlight legibility test, second only to Samsung's own Galaxy S6 edge+.

Samsung's Exynos 8890 chipset is paired with an LTE Cat. 9 modem. Theoretical maximums are 450Mbps downlink and 50Mbps uplink. If you have access to an HSPA network only, you'll get a maximum of 42Mbps and 5.76Mbps respectively.

NFC support is present and is used for Samsung Pay (in conjunction with MST), which lets the S7 replace your credit cards. It's also useful for pairing with other devices and reading NFC tags.

The microUSB 2.0 port on the bottom of the phone supports fast charging and regular USB 2.0 transfer speeds. With the included adapter you can easily use the USB Host and OTG support - you can connect a mouse or a keyboard, USB flash sticks, or just use the Galaxy S7 as a power bank.

We noticed the Galaxy S7 lacks MHL support, which should render wired TV-out impossible. But since the wireless options are that rich, we suspect few people will miss it.

Battery capacity is one more key area where Samsung gives you more with the Galaxy S7. The smartphone packs a 3,000mAh power bank, a substantial increase over the S6's 2,550mAh. Okay, the battery is still sealed, but that's a lot easier to live with when there's simply more of it.

It's also quick to charge, even if the S7 only supports Qualcomm's QuickCharge 2.0 standard and not the latest version 3.0. Samsung promises 0 to 100% in 90min for the S7, but doesn't say just how rapidly those percentages climb from flat to, say, 70% where it starts to taper off.

Much like the company's last-year flagships, the Galaxy S7 is also capable of wireless charging with pads compliant with both Qi and PMA. Samsung will also sell you a fast wireless charging pad, which can fill up the battery nearly as fast as a cable will. 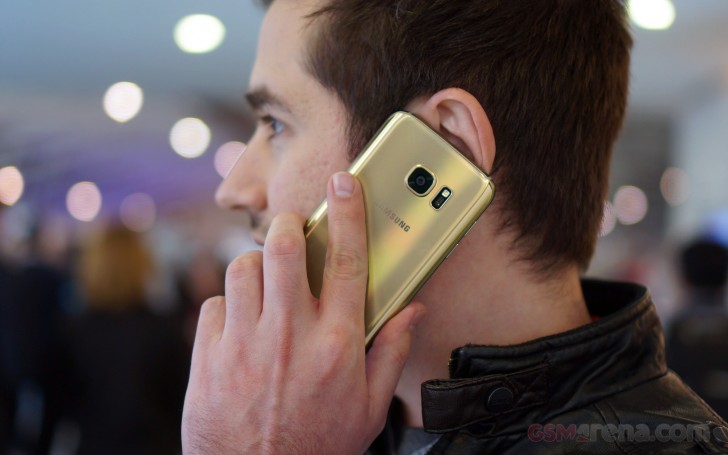 Now, let's move on to our test results, where the S7 does indeed outlast its predecessor. 23 hours of voice calls on a 3G network is three more than the S6, and the nearly 15 hours of video playback are about 2 and a half on top of last year's model, and an impressive achievement in its own right.

It's web browsing that is a slight letdown, at nine and a half hours with the built-in TouchWiz browser. We did manage to squeeze close to an hour more using Chrome, but even 10:20h isn't spectacular. Still, in the scorecard we've used Samsung's own browser result, as that's our default course of action when more than one app is provided.

The Always On display feature was always going to be a battery drainer, no two ways about it. Samsung's claim that it would cost you 1% per hour seems about right and it does leave a huge impact on the overall endurance rating. That's because our proprietary score also includes a standby battery draw test, which we carried out with the AOD off and then once again with AOD on. These results are not featured in our test scorecard but are calculated in the total rating.

Since its launch, the AOD setting has been optimized and now allows you to schedule times to activate it. Of course, your mileage will vary depending on how long you keep the phone out of your pocket.

Our proprietary rating denotes the number of hours the phone will be operational if you are to make an hour of 3G talks, web browsing and video playback per day. Such usage pattern is of course entirely artificial, but we've established it so our battery results are comparable across devices.