We had the opportunity to spend the day with the Samsung Galaxy S7 edge and we set out on a photo tour of Barcelona, MWC's home city in the last ten or so years.

Of course, we stopped at the Sagrada Familia. This remarkable building is rich in intricate detail and the Galaxy S7 edge did an awesome job of capturing it all.

Here's a video of the iconic landmark.

We got up to a higher vantage point and this was a perfect selfie opportunity.

With the sun at an odd angle, we enabled HDR, which helped bring out more detail in the shadows.

We also tried a panorama, the Samsung Galaxy S7 edge stitched things perfectly and the resolution is impressive. It doesn't look like Samsung has enabled HDR in panoramas, though.

This was fun, but the S7 edge camera does great with ordinary buildings too.

The construction of these buildings is actually finished

These are the Porta Fira Towers, a 28-storey skyscraper hotel.

Shooting video and walking is the #1 cause of handshake. Here's Galaxy S7 edge's attempt to correct it with OIS.

We moved deeper into the streets where tall buildings cast shadows, but S7 edge camera was unfazed. You can end up with a cool bokeh if you focus on a close-by object, check out the last shot.

More camera samples from the streets of Barcelona

As we went by, we took some shots of street shops and the image quality looks enviable.

Here are some close-up shots too.

Okay, we didn't walk all the time, we took an occasional cab too. Time-lapse is the way to go when you're stuck in traffic.

A reward at the end of a long day. Sunset presented a perfect opportunity to test the low-light skills of the camera. With a bright aperture (f/1.7), large pixels (1.4µ) and OIS, the camera did brilliantly.

ISO rarely went over 250, the shutter speed went as low as 1/10s on some occasions, but the OIS kept things blur-free.

Oh, the perils of the job - we walked into a bar. Not the best sort of lighting - mostly dark pockmarked with bright spotlights.

The Samsung Galaxy S7 edge handled things admirably, most phones would have made a murky, blurry mess. You can clearly see the people, but also the bottles at the wall (in front of a bright backlight).

Speaking of a poor combination of light and dark, shooting the sun as it sets behind tall buildings is a challenge too. We resorted to HDR mode, which really rescued the shot.

The camera is quick to launch and shot to shot time is lightning fast. We noticed the Galaxy S7 edge comes with a few more pre-installed shooting modes than the S7 and both had fewer out of the box than the S6.

The interface favors one-handed use and even on the 5.5" screen of the S7 edge, the home screen shows a 4x4 grid of huge icons. We flipped that to 5x5 and prefer it that way, but we can see where Samsung is coming from. 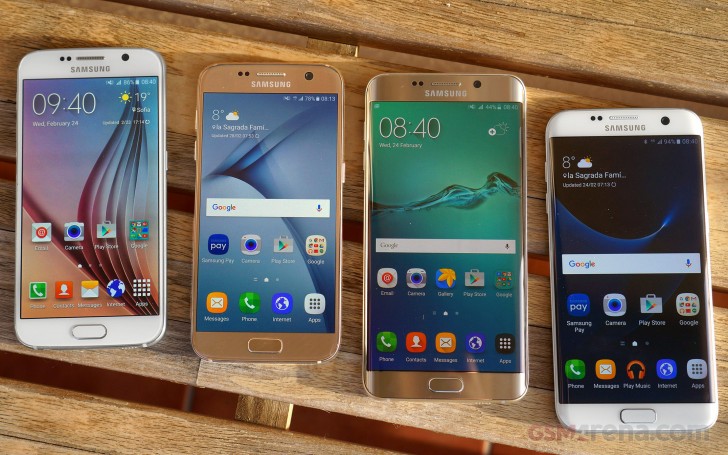 The Galaxy S7 edge feels really comfortable in the hand and we attribute that to the curved back. The smaller Galaxy S7 definitely feels thicker and heavier than its predecessor.

Despite their metal and glass build, we had a pretty firm grip on the two phones (all metal phones can be harder to hold). That said, they got smudged up with fingerprints really fast. 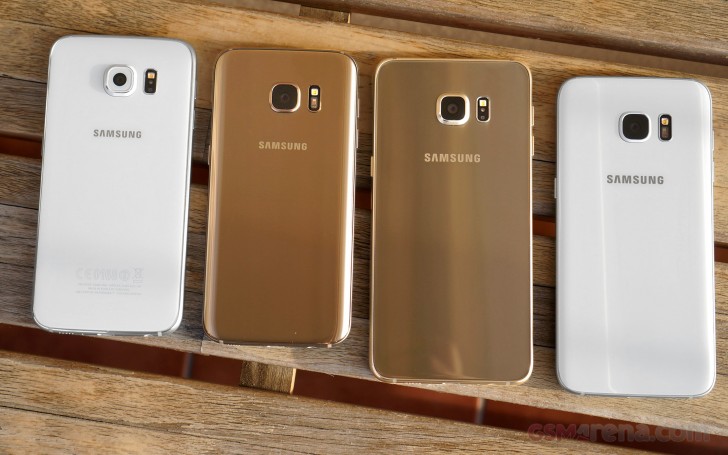 The Always On screen gets the job done and while it's faint compared to the maximum brightness of the screen (for the sake of battery life), we could still see the clock even in direct sunlight.

The day may be over, but we're not done yet with the Samsung Galaxy S7 and S7 edge. The latter will take on the LG G5 in an epic head-to-head before we leave Barcelona.