It's the last few hours before Samsung unveils the S7 family, so here are some more leaks to help pass the time. The Samsung Galaxy S7 edge retail box has been photographed and, as usual, it features a quick rundown of the most important specs.

The Galaxy S7 edge camera will be a "Dual Pixel" 12MP shooter. Canon has "Dual Pixel" sensors, which offers super quick, super accurate focus because 80% of the viewfinder area is used to focus instead of a fixed number of focus points. Anyway, there's a 5MP selfie camera too. 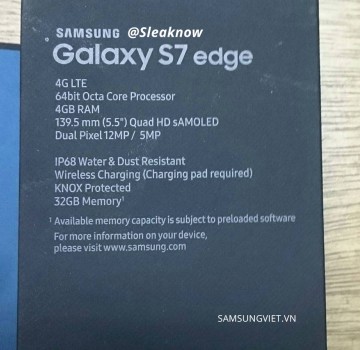 The IP68 water and dust resistance are confirmed (again, no word on microSD, but it's pretty certain at this point). There's wireless charging and KNOX too.

We've seen Photoshopped retail boxes before, so don't take these specs as gospel. Still, a million leaks can't be wrong.

for people like me who use their phone as daily driver multimedia pc money is nothing i use my note 4 for almost everything and i need storage for applications lots of them in fact today demanding games take couple of gb space in phone memory ...

i hope they didnt make 64 gb only for some countries bs in note 6 and bring proper internal storage with micro sd expansion and i mean proper i am saying 128 and 256 gb ufs 2.0 memory