The Galaxy S7 active couldnt tread water, but AT&T wants Samsung to have another go. Earlier, its code name was leaked - Cruiser - and now the first footprints of this mysterious beast have been found in an unexpected place.

Netflix confirms that the SM-G892A - aka Galaxy S8 active - supports HD streaming. Good to know, but kind of a spoiler, Netflix. The regular Galaxy S8 is already waterproof to an IP68 level (over 1.5m depth and 30 minutes), but so was the S7. 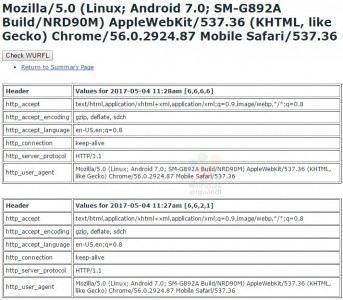 What the S7 active added was MIL-STD-810G, so we expect to see the Galaxy S8 active uphold the same military standard. We do wonder if it will have hardware keys on the front - the S8 dropped them, but active phones need them because touchscreens and water dont mix.

Anyway, the user agent doesnt reveal much more than the existence of the phone. It does list the Android version - 7.0 - but thats what the regular S8 has at the moment, so no surprises there.

Hope they don't lock this on AT&T again. On a related note... Samsung should have a plastic back phone option for all their glass models. Why do I want a glass back if I'll always need a case to protect it from shattering?

Except it does in fact mean something. So maybe join us back here in reality