After a month of what seemed like never ending barrage of leaks, Samsung has finally (and officially) announced its Galaxy S8 and Galaxy S8+. This marks the company's first major smartphone release since the sad demise of the Galaxy Note7 last fall, which prompted the company to implement a new 8-point battery safety check to the S8 and all future devices.

The Samsung Galaxy S8 is Samsung's first major design change since the Samsung Galaxy S6, when Samsung went with premium materials like metal and glass to construct a beautiful device. And beautiful these devices are. Both feature curved edges on both sides so there is no longer an 'edge'-specific model. The S8+ otherwise has the same features and specs at the S8 except for a larger display and battery.

The display is the hallmark of the two phones - tall and narrow, pixel-rich and covering as much of the phones as possible. The aspect ratio is the odd bit here, though we've been prepped by the LG G6's 18:9 already - Samsung's panels are in an even more unorthodox 18.5:9 ratio. The two are super AMOLEDs, of course.

Samsung is one of the first, if not the first, to launch with the latest Snapdragon 835 chipset. As every other year, there will also be an Exynos version for some markets.

The camera sensor for the S8 duo appears to come from the S7 and Note7, but with promised tweaks in processing (Pixel-like image stacking) the camera should be even better. And we're digging the bump in front camera resolution - it was high time Samsung decommissioned those 5MP selfie shooters.

Samsung Galaxy S8 and S8+ at a glance

Samsung is also big on iris recognition, though it could have used a better ambassador for it than the Note 7. It is what is. Let's hope it's good enough for us to stop kvetching about that unconventionally placed fingerprint sensor.

A few other check boxes in the specsheet sure won't leave us complaining - the IP68 rating (should be mandatory on flagships, really), 3.5mm headphone jack (let's not go there again), and USB-C port (USB-C on all the things, already). AKG headphones also sound nice. Having them in the box, that is, we haven't actually heard them play. 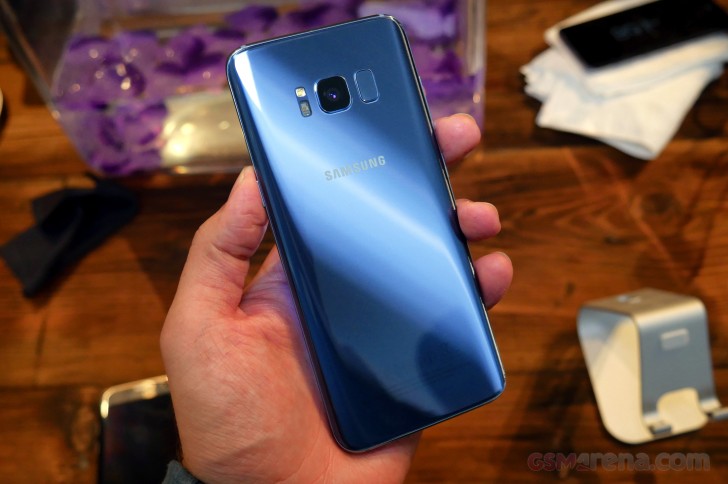 We got to spend a few hours in a room with a few Galaxy S8 and Galaxy S8+ near-final units - the perks of the job. What good are those initial impressions if we don't share them with you?

FYI the XZ Premium using the display panel to do the 4k shifting it is saving more energy to switch between FHD. The 960fps video is for creative user. The hi-res audio is for audiophile. The IMX400 is for Xperia XZ Premium and XZs not S8 or S8+.