The Galaxy S7 was Samsung’s first phone to feature a heat pipe and word from the grapevine is that the company will use a similar design for the upcoming Galaxy S8. Allegedly, Samsung considered moving to a two-pipe design, but ultimately decided to stick with the tried and tested setup.

Back when the S7 launched, its heat pipe was the thinnest on the market - Samsung worked with its partners to make a pipe just 0.4mm thick. The pipe is responsible for taking heat from the chipset and bringing it to a graphite sheet on the back where it can be dispersed. 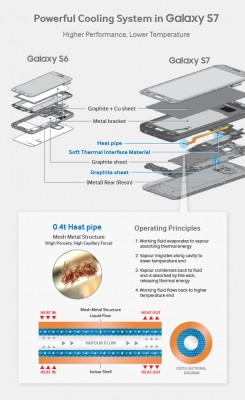 The heat pipe design of the Samsung Galaxy S7

Heat pipes are often found in high-end computer coolers (both desktop and laptop) and have gained popularity in phones recently. Apparently, LG is considering a similar pipe for the LG G6. Anyway, Samsung is expecting shipment of the Galaxy S8 pipes to start in February.

I wonder how smoothly an apple would run Android, you know, an actual OS?

While Apple effortlessly leapfrogs android phones in benchmarks, the only way for android manufacturers to get ahead is by using heat pipes and duct tape?

Dual core? Have you even heard of daydream? Virtual reality? It needs octa cores for starters because of heat issues and battery drain, even processors go for lower semiconductor fabrications to address those problems... go play with your iphone whil...